MARK HARADA heads to Bohol for a day trip he wishes is a week long.

From chocolate-like hills to candy bar-sized primates, forest-lined Loboc River to pristine Panglao beaches, the Philippines’ Bohol province has enough to knock anyone’s socks off - including someone who’s almost seen it all in the country.

Whether you travel by plane or high-speed ferry, any journey to Bohol starts and ends in capital, Tagbilaran. Though a city, this is no metropolis and feels almost sleepy when compared to much busier Cebu, which is a comfortable two-hour boat ride away. 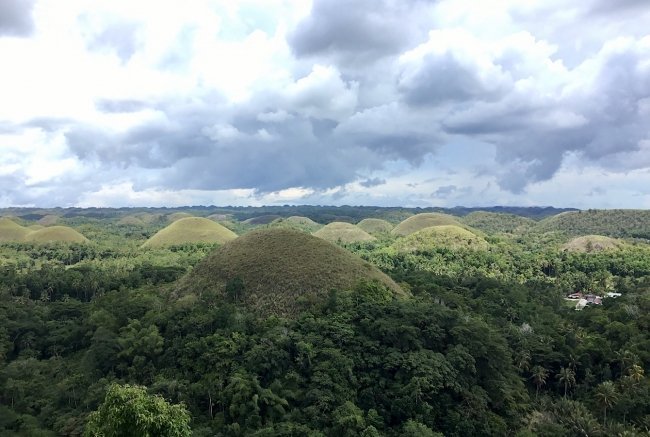 It doesn’t take us long to leave behind the quiet streets of Tagbilaran for the even quieter roads inland, bound for Bohol’s biggest attraction, Chocolate Hills.

On the way, Travel Village guide Cecile explains how Bohol is trying to become an eco-cultural tourist destination - and with its abundance of natural beauty, subsistence living and apparent cleanliness, it’s understandable.

Beyond the verdant forest, the almost brown-looking Chocolate Hills appear. There are more than 1,700 of them, we’re told, scattered over some 50 km2 like oversized Hershey Kisses (from which they got their name). But the best place to view the hills, which measure 40 metres up to 120 metres in height, is from the Chocolate Hills Viewing Platform.

Whilst popular, you could hardly call this a mass tourism spot. Instead of jostling for position to view the hills, there are open panoramas in every direction. And the 150 or so steps up to the peak look-out point, even when taken in the warm, midday sun, are totally worth it.

Away from Chocolate Hills, another awesome experience comes in the form of a Loboc river lunch cruise. Though a little busier down here, once you’ve left the departure point, the cruise feels immediately intimate. 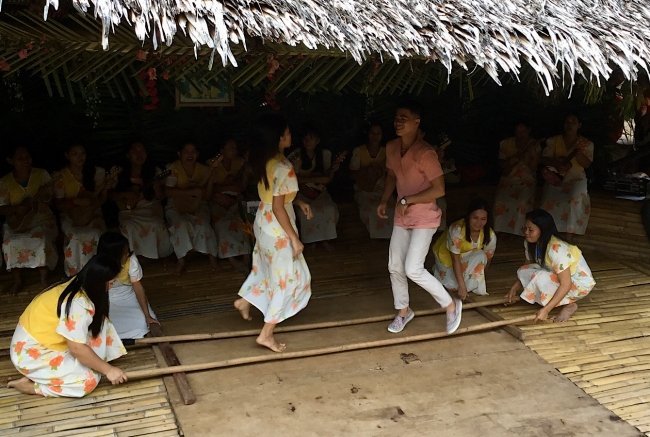 As our private ‘native catamaran’ vessel gently rolls down the Loboc River, with jungle almost bursting at the seams on either side, my mind turns to Apocalypse Now, which was filmed in the Philippines. But there’s no dread here, of course!

As always in the Philippines, food plays a central role in the experience, with grilled meats - especially the lechon baboy (crispy skinned pork) - and seafood featuring prominently. But there’s also a selection of local cuisine, from a salty seaweed salad to an unusual mix of raw vegetables like okra and bitter melon.

Equally wonderful (and predictable, given this is the Philippines) is the onboard entertainment that comes by way of a solo singer/guitarist. Though some of the contemporary tunes feel a little out of place at times, there are moments of silence to enjoy the sounds of the forest that comprise mostly loud insects and birdlife.

Along the way, there’s even a stopping point, where a choir of singers and guitar players in traditional garb serenade passing boats. And it wouldn’t be the Philippines, if said entertainment didn’t include the famous Filipino bamboo dance.

If you’re game to try the risky looking dance, which involves the clapping of hefty bamboo sticks together to music, you’ll get the chance to show your moves too. After two grandiose experiences, a visit to the Philippine Tarsier Sanctuary may seem a little underwhelming at first. But these creatures, the world’s smallest primates, quickly capture our hearts, to prove less is sometimes more.

The Sanctuary, which is located just 15 minutes from Tagbilaran, is set among thick foliage, and measures 8.4 hectares, with one hectare fenced off for research and tourism. But this primate, which could fit in the palm of my hand, needs all of that area.

According to Cecile, the tarsier is a very solitary and territorial animal. And they’re famously sensitive, so it’s important we keep our distance - at least a couple of arms’ lengths - from the big-eyed primates, of whom we see four around the sanctuary, tucked tidily between the lower branches of trees.

The Philippine Tarsier Sanctuary is also operated by the not-for-profit Philippine Tarsier Foundation, which was established to conserve, and promote research into the cute critter. So a visit here is also a donation to the tarsier.

Elsewhere in Bohol, there are historic places of worship - including what many consider to be the second oldest stone church in the Philippines, Baclayon, as well as Panglao Island, where the bustling night life is matched only by the underwater activity and some of the country’s - and world’s - best scuba diving. But that’s for my next trip here... and there definitely will be one of those.

In Cebu, the writer stayed at Crimson Resort & Spa Mactan. Read a review of the property here.

The writer travelled around Bohol with Travel Village and Tours.

In Manila, the writer suggests stopping over at Solaire Resort & Casino. Read a review of this hotel here.