It looks like the postcard: the white, charcoal head of a humpback whale breaching out of the depths of the turquoise sea. It’s mid-August, the beginning of whale watching season; and I’m on a boat in Platypus Bay, near Hervey Bay, enjoying one of the world’s greatest wildlife experiences.

Hervey Bay, situated about 300 kilometres (or 186 miles) north of Brisbane, the capital of Queensland, is Australia’s unofficial whale watching capital. Even Mimi Macpherson (model Elle Macpherson’s younger sister) had her own whale-watching company (her boat christened Discovery One) in Hervey Bay; she has since sold it.

It’s also unofficially known as God’s waiting room; Queensland’s version, albeit a smaller one, of Florida. For that reason the town, dotted with boats and caravans, is relaxed and affordable. Once you arrive, life decelerates – even for the whales. 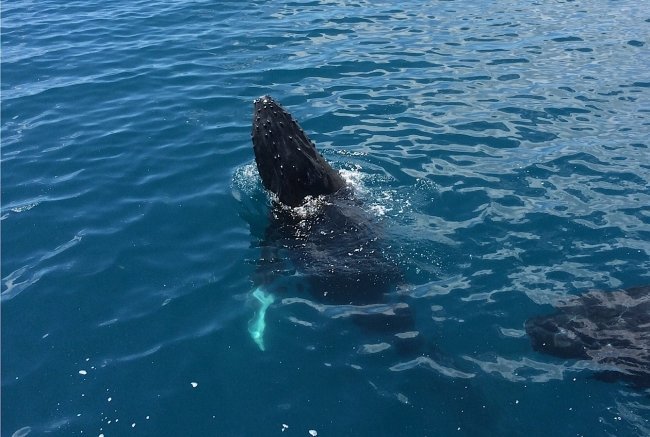 According to visitfrasercoast.com, research shows Hervey Bay is the only genuine stopover base for these creatures on what is one of the longest mammal migration journeys on the planet. Here, the whales spend up to a fortnight resting, playing and socialising.

This carnival of nature, which continues until October, is the town’s main attraction; and the arrival of its stars, the humpback whales, is celebrated with the Hervey Bay Ocean Festival. The festival includes a whale parade, a concert and a blessing of the fleet, a centuries old tradition, believed to have originated in the Mediterranean to ensure a safe and prosperous season to all vessels.

People from all over the word come to see the whales; and as I check-in to the Mantra, I can hear people speaking Chinese, French and Italian.

The Mantra is a short walk to the cafes and restaurants and the meeting point for the whale watching tours. My room faces the harbour and I watch the whale watching boats return in the late afternoon; my voyage is the next morning. There are ground level rooms with swim-up pool balconies.

Of all the cafes the most popular by far is Café Balaena, open for breakfast, lunch and dinner.I order the coral trout fillet before turning in for the night.

At 8.30 the next morning, after a croissant and cappuccino at Café Balaena, I board the Spirit of Hervey Bay at the marina. As the Spirit chugs out of the harbour, salt air removes the awareness of my coffee, and the sun, winking at the water and in to my eyes, washes away ambition, life’s bustle.

I hold on to the rail as the ship rhythms against the swell, resulting in a bumpier ride than the previous year, towards the horizon; it looks like we are going everywhere but nowhere.Despite this, a dingy trails behind us in hopes of a bumpier ride. I’ve been a visitor here for at least 18 years.

We pass an island of turquoise water, white sand and green trees. This is the north western side of Fraser Island, and anchored at 1840 kilometres (or 1143 miles) squared, the biggest sand island in the world. Few islands lay claim to such heritage. The island is as natural and untamed as its inhabitants: dingoes. We see a whale blowing air; they blow water vapour and mucus as they surface to take a breath. Our tour guide tells us that this whale is not very old due to its size. Humpback whales are the fifth largest of the great whales. They grow 12 to 15 metres long, the size of a bus, and weigh 25 to 40 tonne, about five elephants. Our tour guide informs us that whales can live 50 to 85 years of age. The lifespan of a human. It’s not doing much else so we move on.

We spot three whales. There is a mother and her calf and an escort, a male whale. They have two seasons: feeding season (summer months); and mating season (winter months) – they have a gestation period of 11 to 12 months. During the warm season, whales migrate to cold waters where food is abundant; and during the cold season they migrate to warmer water for breeding.

Further on we see a mother and calf feeding. The crowd ‘ooos’ and ‘ahhs’ and everyone hurries to the front of the boat. A swell rocks the boat up and down. Everyone grips their phones and cameras that bit tighter.

Calves can drink as much as 600 litres of milk every day. Humpback whale milk is about 30 to 50 per cent fat as opposed to breast milk which is about 5 per cent fat. This high percentage of fat helps them develop a thick layer of blubber, which protects them from the cold waters as they travel back to colder waters for feeding season. They gain about 80kg of weight each day.

The milk is often described as having a toothpaste like consistency. This thickness is very important. In order for the female to feed her baby, she needs to either shoot the milk into the baby’s mouth through the water or allow it to suckle the milk from her nipple. If the milk is not thick enough, it will dissolve in the water, making it hard for the baby to feed and receive the nutrients it needs.

Our tour guide informs us that whales eat krill, a shrimp-like crustaceans up to 5cm long like your pinkie, plankton and small fish. Humpbacks sieve food from huge volumes of water using baleen which is specialised fringed, mouth plates. During the winter they fast, living off fat stores from feeding season.

We travel on until we see a whale breaching, a form of surfacing behaviour where most of the whale’s body leaves the water. No one really knows why they do this. Theories include that it’s a way of communication to attract or warn off other whales. 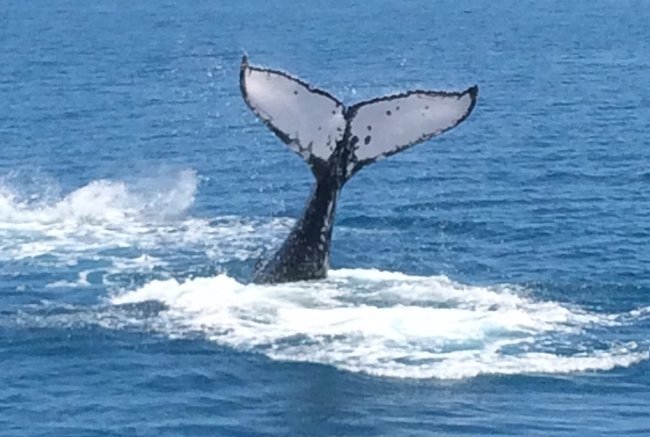 We move on and observe a whale spy-hopping, when the whale lifts its head and part of their chest vertically out of the water so their eyes are above the waterline. The whale truly looks inquisitive. It’s almost as if it knows who were are.

We continue until we spot a whale lobtailing or fin slapping and tail slapping. This occurs when the whale lifts its fin or tail out of the water and brings it down to the surface hard and quickly to make a slap sound.

But even those who come to see the whales cannot fail to see the other wildlife: sea eagles, dolphins.

The Spirit starts the journey back to the marina; it’s not as bumpy and I’ve got my postcard shot. It’s clear the Spirit is at home in these waters.

Tell us about your Hervey Bay experiences...