Samoa: back to business

NATASHA DRAGUN visited Samoa to see how hotels and tourist attractions are recovering in the wake of Cyclone Evan. 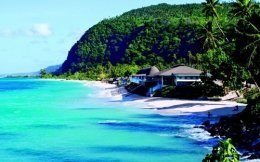 Circling Samoa as we come in to land, I can’t help but feel as though I’m about to touch down on the set of ‘Lost’. The 10 specks far below rise from the ocean like the backs of several small green turtles, ringed by white sand and then reefs in a spectrum of blue.

Approaching the runway, coconut trees bend in the breeze and a few thatched roofs peek through tall stands of papaya here and there. At immigration, a pair of policemen in lava lava (traditional sarongs) tap their toes to a band twanging melancholy tunes on ukuleles. Fans whirr lazily overhead and the baggage carousel jolts into action, moving cases very, very slowly around the room.

Tropical breezes, beaches and a blissful ignorance of time: Samoa is an attractive prospect for travellers wanting to forget life’s stresses for a week or two – even more so since the island nation switched sides of the International Dateline and became one of the first countries in the world to see in the day, rather than one of the last. Instead of being 21 hours behind Australia, Samoa is now just three hours ahead, instantly making it a more appealing tourist destination for antipodean travellers.

Yet for all its languid, sun-kissed appeal, Samoa continues to struggle against natural disasters. The country had only just finished cleaning up from the tsunami that hit in 2009, causing widespread damage and close to 200 fatalities, when Cyclone Evan struck on December 13, 2012, devastating large parts of the main island of Upolu.

The worst tropical cyclone to affect the archipelago in more than 20 years, Evan hit the country’s capital the hardest. Apia’s roads were blocked by floodwaters for days, and a collapsed departures hall at Faleolo International Airport saw flights disrupted. Schools, homes and buildings have been destroyed and the repair bill is thought to be in excess of US$300 million.

But the government and the locals are optimistic and the cleanup response has been swift, so much so that tourism bodies are already predicting a bumper season over the upcoming peak visitor months of April and May, and through the antipodean winter. Flights are now back to normal and a record 18 port calls are expected by cruise liners over the year, including a debut from Royal Caribbean’s Marina of the Seas, visiting on March 12.

“Getting visitor numbers up is still our priority,” says Dwayne Bentley, the Marketing and Promotions Manager for the Samoa Tourism Authority, based in Apia.

“The land area damaged by Evan is wide, but it’s not the entire country. In fact, many parts of Samoa were not impacted at all.”

Indeed, much of Savai’i, Samoa’s largest island and a puddle-jump to the northwest of Upolu, was spared damage and all beaches, attractions and resorts on the island are welcoming visitors as normal, with plenty of reasons to linger.

The chicken-shaped island comes with an active volcano at its heart. Mt. Matavanu doesn’t exactly soar (it’s only 402 metres high), but it does let off a lot of steam, and its mineral-rich volcanic soil means lush jungle and coconut groves cling to its mountainous ridges. Don’t miss the Alofaaga Blowholes, a succession of lava tubes leading to the ocean, its blowholes releasing a huge spray of 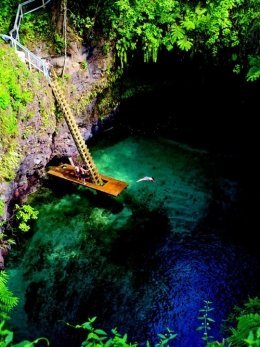 Cave pool, Samoa water every time a wave hits. Buy a coconut from the local stall-keeper and aim it at one of the holes – it’s a little cheesy but a lot of fun, particularly if the coconut makes its mark and shoots, cannonball-like, into the sky.

On Upolu, the 30-day state of emergency declared immediately after Evan has been lifted, and the tourism bureau is working with the National Beautification Committee to help village chiefs repair and rebuild, particularly on the northern and eastern coasts of the island that bore the brunt of the cyclone’s impact.

Many of the island’s beaches are welcoming tourists, including Paradise Beach (named after the 1953 movie starring Gary Cooper that was filmed there) and Lalomanu, arguably the country’s most picture-perfect stretch of sand. Upolu’s other ocean attraction is the To Sua Trench, a dramatic 30-metre-deep swimming hole enveloped by knife-edge-sharp basalt cliffs and jungle that fills with the tides from the ocean. Even if you’re not diving in, To Sua Trench is worth visiting for its jaw-dropping setting.

Robert Louis Stevenson, the Scottish author of ‘Kidnapped’ and ‘Treasure Island’, was so taken by Samoa that he spent the last four-and-a-half years of his life in the country. His family home, Villa Vailima, is now a museum and thankfully escaped damage during the cyclone. This majestic building plus the trail (known as the Road of the Loving Heart) to the top of Mount Vaea where Stevenson is buried, are both open and well worth visiting.

Most of the damage has been to Upolu’s hotels and resorts. Some have already re-opened after quick cleanup operations, including Seabreeze Resort, Aggie Grey’s Lagoon Resort and Spa, Sinalei Reef Resort and Spa, and Coconuts Beach Club Resort and Spa. A number remain closed: the Sa’moana Resort is expected to re-open on April 1 this year, while the historic Aggie Grey’s Hotel and Bungalows in Apia has just announced that it will not accept bookings until 2014, with the hotel’s owners taking the opportunity to completely refurbish and expand the property.

The cleanup will likely receive a welcome injection of funds, according to Bentley; “The government is in the final stages of planning a recovery program to assist tourism operators, with details expected to be announced in the coming weeks.”

Bentley’s team at the tourism bureau also have their eye on international travel providers, and are working to develop discounts and packages to encourage tourists to book a Samoan holiday in 2013. “We’re creating a number of tactical campaigns with tour operators and have already gone to market with these and will continue to roll them out,” said Bentley. One such package with Coral Seas gives travellers return economy airfares, five nights’ accommodation and daily breakfast from just AU$1,119, departing Sydney.

“There’s still work to be done, but Samoa is well and truly back to its best,” says Bentley.

Getting there: Virgin Samoa operates direct flights from Brisbane and Sydney to Apia, the Samoan capital on Upolu. 136-789; www.virginaustralia.com

For information on the Coral Seas package, visit www.coralseas.com.au

Visit Villa Vailima, Robert Louis Stevenson’s family home and now a museum dedicated to the author. Guided tours run on a regular basis, and visitors are welcome to walk to the top of Mount Vaea (around 45 minutes) on their own.

Beach hop. The best way to get a taste for the Samoan countryside is on one of the day trips offered by Samoan Scenic Tours. Different trips will take you around Upolu’s best beaches and the To Sua Ocean Trench as well as to Savai’i.

Don’t miss September’s Teuila Festival, an annual celebration of Samoan culture and heritage. In addition to craft workshops and dancing, highlights include a regatta and the Miss Samoa pageant.