After a challenging four-kilometre hike, I conquered the climb up to the amazing Pulpit Rock (Preikestolen). 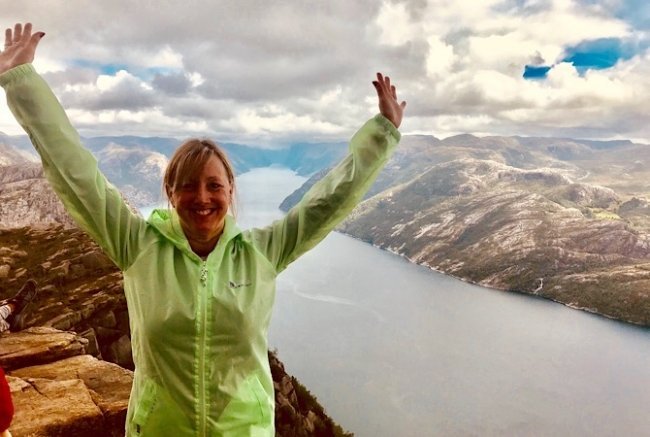 Even with my fear of heights I was compelled to move to the edge of the dramatic rock formation to take full advantage of the breathtaking views of Lysefjord below.

I did so, I confess, from a lying position, but the experience will stay with me forever. This was Day Five of my 15-day APT Small Ship adventure through the Norwegian Fjords on Island Sky.

We explored Vigeland Park, featuring more than 200 thought-provoking sculptures by Norwegian artist Gustav Vigeland, and took a journey back in time at the Viking ship museum, home to three impressively crafted and preserved ships from that age (800-1100AD).

An undoubted highlight of the voyage was the beautiful city of Bergen (Day Seven), one of three Norwegian sites included on the UNESCO World Heritage List.

The colourful wooden merchant houses lining the waterfront were fascinating, as was the city’s lively Fisketorget (fish market) near the wharf.

I built up my courage to try some local food, including a reindeer sausage and some dried whale meat. Personally, I would not recommend the latter.

Bergen is rich in culture and music, and the itinerary included a visit to the home of Edvarg Grieg, Norway’s greatest composer. Many passengers also took the Fløibanen funicular (one of the country's best-known attractions) up to Fløyen, which is located 320 metres above sea level and offers extraordinary views.

Island Sky offers 57 suites, all with outside views and some incorporating private balconies. There are also public lounges and bars, and a large outside deck from where you can view the ever-changing vistas. We cruised through some spectacular fjords – including Hardangerfjord, Sognefjord and Naeroyfjord – and around every turn there was a new mountain (occasionally snow-capped), green pasture, quaint small village, waterfall or glacier.

A hike up to Briksdal Glacier delivered another incredible sight to see. The icy blue colour of glacial lakes and rivers is just gorgeous.

A trip to Norway would not be complete without experiencing the Flam railway. As well as being one of the world’s most scenic train trips, it’s also one of the steepest, with the journey taking passengers from the fjord in Flam to the mountain station Myrdal, 867 metres above sea level. The views are breathtaking and include an abundance of cascading waterfalls.

A celebration was to be had by all as we cruised into the Arctic Circle on Day 13. We were now among the spectacular Lofoten Islands.

The islands have been the centre of the north east Atlantic cod fisheries for 1,000 years. We visited the famous fishing village of Nusfjord with its colourful houses and adorable bakery.

As we headed toward Tromso, our final destination, we did an extra special cruise into the famous Trollsfjord, a stunning narrow gorge surrounded by steep mountains. Only a small ship has access to a place like this.

Travelling on a small ship provided other opportunities to venture to smaller, less populated places and it allowed us to avoid the huge crowds (as well as the long waits to embark and disembark) that come when travelling on larger ships.

I would highly recommend advising clients to explore this part of the world in a small ship if at all possible.