SIVB CEO: 'Time for procrastination is over – now is the hour'

Underlining the importance with which his government views the tourism sector as a positive contributor and catalyst for the Solomon Islands economic future, Prime Minister the Hon. Manasseh Damukana Sogavare has officially opened the ‘Invest to Preserve’ forum at the Heritage Park Hotel in Honiara.

Addressing the more than 200 delegates present on day one of the two-day event, including the Minister for Culture & Tourism, the Hon. Bartholomew Parapolo and senior representation from both the tourism and private sector, Prime Minister Sogavare said the “ball was now in our court”.

“Tourism is a key driver for the economic future of this country and there is a need to find the right package to achieve our objectives and my government is seriously committed to promoting the Solomon Islands tourism sector,” he said. 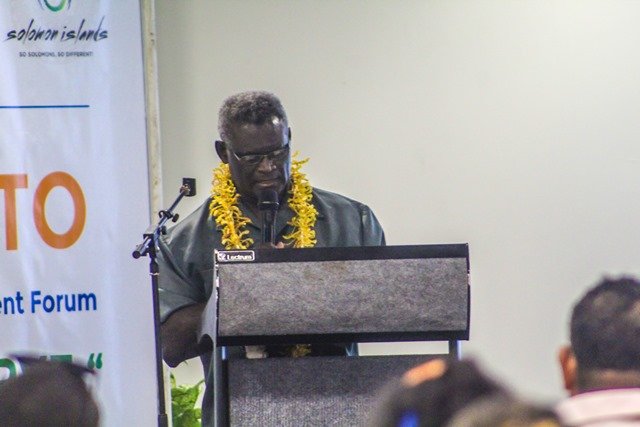 The Prime Minister’s words were underlined by Minister for Culture & Tourism Permanent Secretary; Andrew Nihopara who said the forum presented the opportunity for “us to get it right.”

The theme for the forum – ‘Invest to Preserve’ – has been chosen to reflect the conscious direction the Solomon Islands’ tourism sector needs to pursue if it is to realise the tourism sectors potential in coming years.

A beyond credible line-up of speakers on day one included Governor and Chairman of the Central Bank of Solomon Islands, Denton Rarawa, who emphasised the current dearth of foreign investment into the tourism sector – currently around 5 per cent - and a need to address that situation.

“There is a need in the Solomon Islands for an attractive hotel incentives package promoting construction both of new hotels and renovations of existing properties,” the SPTO CEO said.

Adding further weight to the hotel incentive opportunity, Australia-based RAW Strategy Director, Roger Wellings suggested the entry into the local market by a major international brand, first-class hotel with a 75 per cent occupancy rate would be the spur for a major step forward for the country’s tourism future.

Government commitments on infrastructure development will also be discussed as part of a presentation to be delivered by the Ministry of Infrastructure Department Under Secretary Technical, Jimmy Nuake.

Meanwhile, Solomon Islands Visitors Bureau CEO, Josefa ‘Jo’ Tuamoto has told the destination’s tourism leaders the time for procrastination has passed and the industry needs to act now if the Solomon Islands is to achieve its goals – specifically positioning tourism as the country’s key economic driver.

Addressing delegates on day two of the pivotal ‘Invest to Preserve’ forum in Honiara, Mr Tuamoto there had been enough talking and if the industry did not take that action, it was “in danger of losing the plot.”

Drawing parallels with Winston Churchill’s famous ‘finest hour’ speech given to the British Parliament during WWII, Mr Tuamoto said the tourism industry’s finest hour was upon it.

“The time to act is now, we shouldn’t be passing the buck to the next generation – there is enough grey matter in this room to be able to make the hard decisions we need to make in order to achieve our ends,” he said.

“You have a huge responsibility, you have some decisions to make today and we have to do it as a team – this is the hour for all of us.”

Pointedly addressing potential investors, Mr Tuamoto said first and foremost the industry needed to address the dearth of quality accommodation within the destination, this seen as a critical factor in the tourism sector’s growth.

“The sums are simple – if we have an additional 700 rooms we can service an additional 50,000 visitors, almost twice as many as we are receiving now,” he said.