Durban a hot spot for swingers

On a visit to Durban's Moses Mabhida Stadium, JESSICA ZOITI takes a leap of faith. 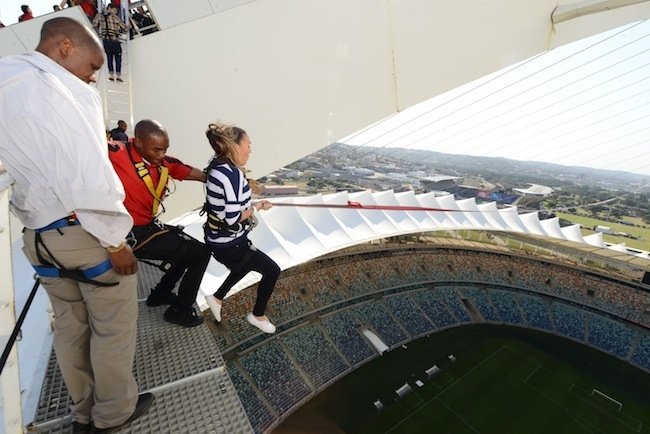 Taking a leap of faith

I love that travel forces me outside my comfort zone. Around every foreign corner there’s an unfamiliar face, tantalising taste and new experience and to me, that’s captivating.

But bungee? That’s an envelope I had resisted pushing until recently. Although not petrified of heights, I’m not particularly fond of them either so when I found myself harnessed and standing on top of Durban’s spectacular Moses Mabhida Stadium I felt more than a bit anxious.

I was here to experience The Big Rush – at 80 metres tall it’s officially the world’s tallest bungee swing and when the grandstands aren’t filled with 56,000 screaming soccer fans, raucous rugby crowds or concert goers, it is one of the stadium’s most popular attractions.

Different to traditional bungee where jumpers dive head first into the abyss below, the swing require thrill seekers to simply walk, wooden plank-style, off the ledge sending them into a freefall before swinging out into a massive 220-metre arc in the centre of the stadium. 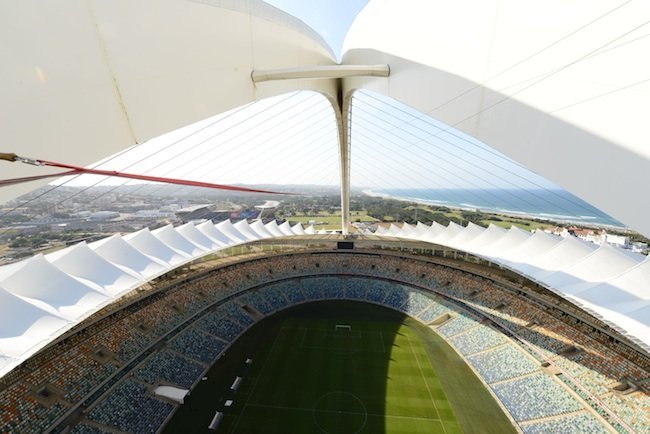 The Moses Mabhida Stadium arc is considered an engineering feat

Reaching the summit requires a 15-minute climb up over 350 stairs. A defining landmark in Durban, the stadium hosted seven FIFA World Cup matches in 2010 and is considered an engineering marvel. Through itss centre, the famous arc was inspired by the ‘Y’ on the South African flag. It is 106-metres tall, spans 350 metres (much of it free-span), weights 2,600 tonnes and is harnessed to the roof by 95 steel cables. For those not game to jump from the arc's edge, a SkyCar takes visitors up to its highest point where the panoramic city and ocean views are breathtaking.

The view from the Big Swing is also magnificent and worth the climb alone, however standing aloft this iconic stadium I realised I was looking forward to the challenge ahead, despite my raging nerves.

Harnessed and standing on the grated platform, the cord gripped between white-knuckled hands, my game plan was to leap before I had the chance to rethink. Not daring to look down I did just that and as my body hurtled towards the pitch below it felt as though I’d left my stomach up on the ledge. Feeling gravity’s full force was shocking to me but as I transitioned out of the freefall and into a giant, gentle, pendulous swing I screamed. Not because I was scared but because I felt total jubilation. 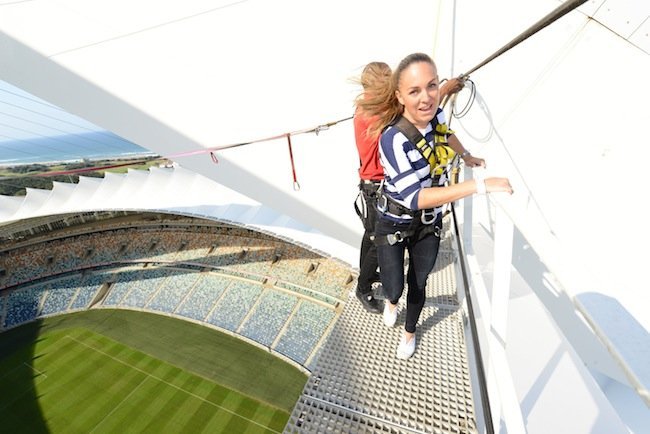 Jubilation after the swing

The experience ended where it began – up on the platform where jumpers are unhitched from the swing before descending the stairs to the safety of solid ground.

I can now tick bungee off my bucket list and will I do it again? You betcha.

The Big Swing is open from 10am until 4pm on Monday, Wednesday, Thursday and weekends. It costs R695 (approx. $AU70) per person and children under 10 are not permitted.