Sanbona: where the wild things are 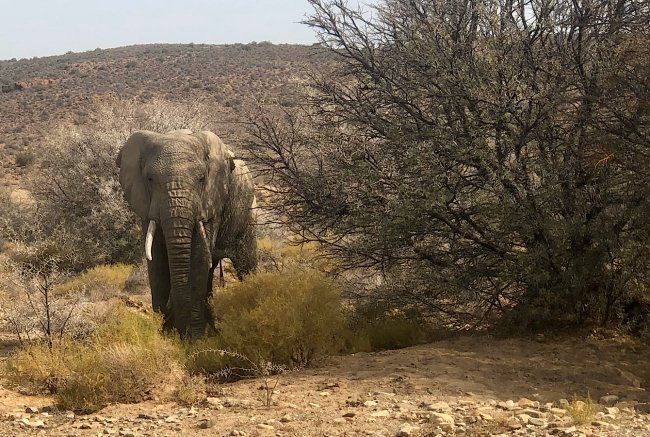 As we scale a small rise into view of the stark but magnificent scenery of Sanbona Wildlife Reserve, our ranger Chelee gets a call: not far from here, two white lions have been spotted.

Chelee, a senior ranger, passionate photographer, vegetarian and apparently, very skillful driver, doesn't speed up, but it feels as if we're going much faster now.

A few twists and turns later in our open-air, all-terrain Toyota and we arrive at the spot where the big cats were seen.

Silence replaces the hitherto drone of the engine as we listen, watch and wait. I almost forget why we're here as the Warmwaterberg mountain range and its Mars-like outcrops mesmerise me. That's right, the lions...

Here, even nothing, in its silence and stillness, is something spectacular.

"Lions are boring," Chelee says half seriously, in reference to the big cats' liking for laziness. And, having not seen the lions, we're off again.

The wildlife at Sanbona doesn't come at you like in a zoo and you won't 'stumble' across them as easily as you might on other game drives in other game reserves.

But that doesn't mean you won't see any - far from it. In a landscape as open as this, that would be near impossible anyway.

It does mean however, you're likely to feel more rewarded with each find. Here, it's about quality sightings over quantity.

The scenery's not bad either; they call it the Little Karoo, a semi desert region not dissimilar to parts of Australia and probably more beautiful than any terrain I've ever encountered in a game park.

All around, giant sheets of rock rise to dramatic red peaks, formed by the meeting of tectonic plates. The land also feels like it's ours alone; with Sanbona measuring 58,000 hectares, which is almost the size of Singapore, we're told, it virtually is.

Nearby, atop a large hill, we have a rare encounter with another vehicle, another distinguishing feature of this reserve, where you'll rarely have to share animal sightings with other cars and passengers. 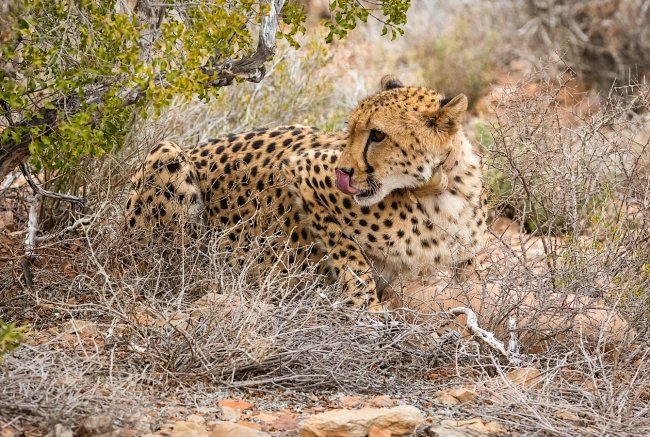 Unlike in many other properties, vehicles aren't allowed off-road in Sanbona either, due to the park's careful preservation of sensitive vegetation. So we're only too happy to swap the security of our 4WD for the occasional hike - another rarity in game reserves.

In a valley below us, we spot a cheetah, whose gaze is fixed firmly on what it hopes will be breakfast - on this occasion, a baby oryx distanced from her mother. From afar, we watch it chase its target over a hill in what we presume is a successful hunt.

Under the watchful eye of our ranger we walk over. It doesn't take us long to find the cheetah, who after catching its breath, starts pulling at the flesh of its catch.

The big cat quickly forgets about the small group of trigger-happy photographers just metres away now. But it's a sight we'll long remember.

Elsewhere in the park, we encounter giraffes and zebra, predictably a range of antelope like springbok, eland and kudu, and unexpectedly a snake (a puff adder, to be precise), which draws us all from the vehicle for a photo shoot. 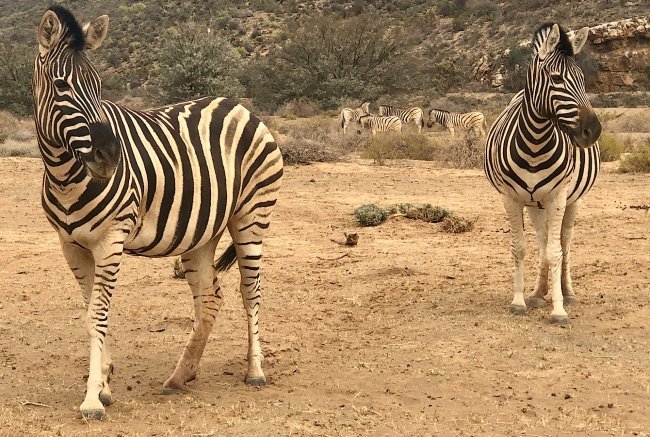 We don't spot the extremely rare Riverina rabbit, but I do see an ostrich for the first time ever, away from its herd, plus many of the 200 or so species of birdlife here. And then, of course, there are the pachyderms.

One elephant, a large bull playing the gentle giant, sways beside a tree before walking languidly across the path of our car, while not too far away, a mother rhino and her calf feed on some grass in a dry creek as dad is warned by mum in a series of grunts to wait for scraps.

The rich tapestry of animals at Sanbona is a result of the park's conservation programs, which sparked the reintroduction of animals indigenous to the region before farming came and went, most notably cheetahs (after almost two centuries away) and Cape Mountain zebras.

And conservation is an ongoing priority, with a wildlife department of veterinarians, ecologists and security staff overseeing fauna and flora preservation.

In between animal sightings, we take time out to appreciate one of the cultural attractions within the park - ancient rock art.

With Roman as our guide, we hike to a hollow in the side of a mountain face. Here, the ranger explains the making and meaning of a few of pieces, which were created by traditional 'sand people' who once roamed these parts.

Painted with a mix of red and yellow ochres, with some antelope blood and fat thrown in, the slightly faded, hand-sized paintings were used as a portal to the spirit world, among other things. And they're dated between 1,000 and 10,000 years old, though no one knows their exact timeline.

Regardless of their precise origins, Roman says they could be the last in the region, so we need to cherish them - as we do everything in this remarkable reserve.

Our guide also gives us a few lessons in botany, talking us through the medicinal uses of wild rosemary and less familiar local herbs like boegoe and buchu, which form part of more than 600 types of flora found in the park.

From the smallest plants to the largest pachyderms, Sanbona is a wildlife reserve where life really is wild. And in a place as diverse and dramatic as this, lions really could be boring.

All images (except cheetah) by Mark Harada