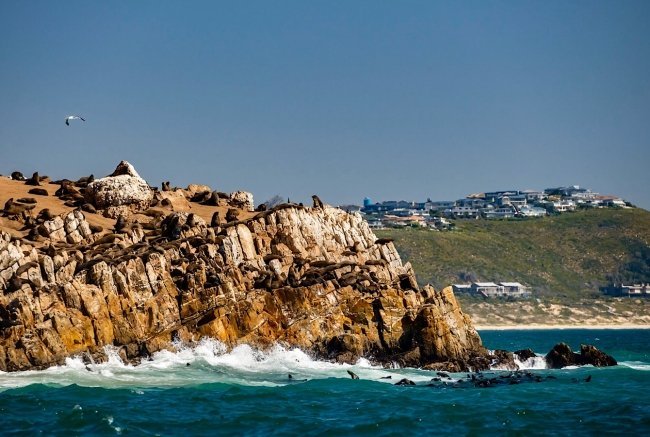 A bugling swell surges against a steep rock face at Robberg Peninsula, doing its best to take countless Cape Fur seals with it. But the swimming seals are as unmoved by the crashing waves as they are the boat of onlookers lapping it all up.

According to Cameron, our guide at Ocean Blue Adventures, which operates sea 'safaris' in Plettenberg Bay, the seals here number between 7,000 and 9,000. And that's no exaggeration.

Lining the precipitous peaks, there are as many sea dogs here as gig-goers at a stadium rock concert - and they're almost as loud, in a cacophony of barking and clapping. 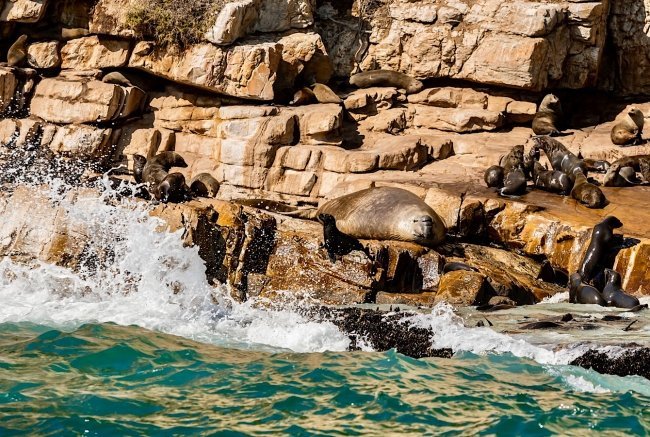 Among them, a giant elephant seal lies idly. Aptly, his name is Solo, and he apparently likes to munch on baby seals around him from time to time. But they ignore him, as they do us.

As marvellous as this moment is however, literally bigger things await.

The largest member of the Marine Big Five - a term given to describe the aquatic version of the safari Big Five - that comprises whales, dolphins, great white sharks, Cape Fur seals and African penguins, lies out to sea in a stretch of water nicknamed ‘Humpback Highway’.

As we pull over a few kilometres out, we catch our first glimpse of them: darkened, humped backs, followed by roars and upwards spouts. 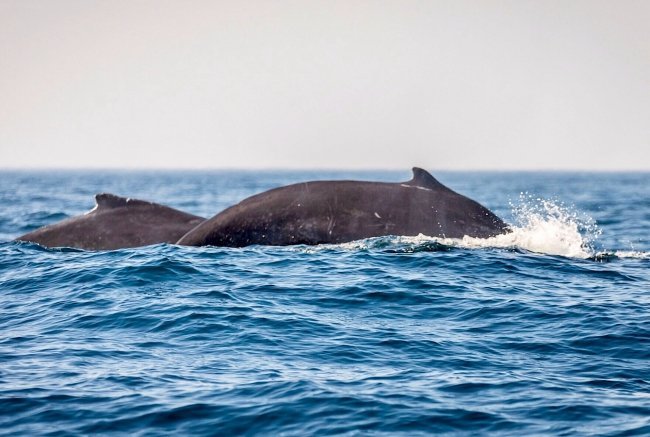 Each humpback whale sighting from then on draws a chorus of “oohs”, “aahs” and even “yee-haws”, followed by a frenzied clicking of cameras and flicking of phones.

A little later, two more humpbacks appear further away, but Cameron says we must respect our current distance as one is a calf.

Instead, we're treated to an even better sight of three 'decoy' whales that appear right before us. We're even given some tail slapping. So awe-inspiring is the scene that I've forgotten about my lurking seasickness - and the absence of the great whites and dolphins that sometimes appear here.

The 90-minute trip ends with what Ocean Blue calls a James Bond-style charge back onto the beach, where our high-speed vessel 'Sabrina' emerges from the water at full velocity before coming to a sudden stop. Now that's how you punctuate a journey like this. And that's two of the Big 5 seen. 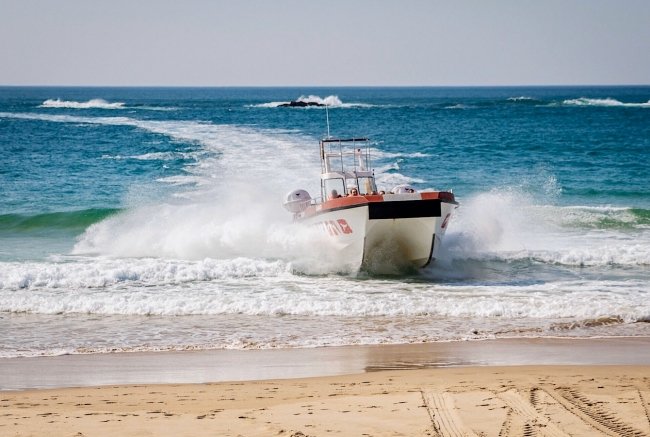 The following day, we awake at our hotel at nearby Brenton Haven Beach to the sight of scores of bottlenose dolphins swimming just offshore - more than I've ever seen in one place; perhaps more than I've seen in my entire life.

Many are even catching waves, as if they know we're watching, impressed. The view from the shoreline, at eye to eye level, is better still. That's three down.

We pick up our search for the remaining two further west, in Gansbaai. Located in the Overberg District of the Western Cape, Gansbaai is a tourist town considered the great white shark capital of the world.

But while images of the white pointer are everywhere around here, the seaside hamlet is also a great place from which to watch whales, seals and penguins (not to mention tonnes of birdlife). 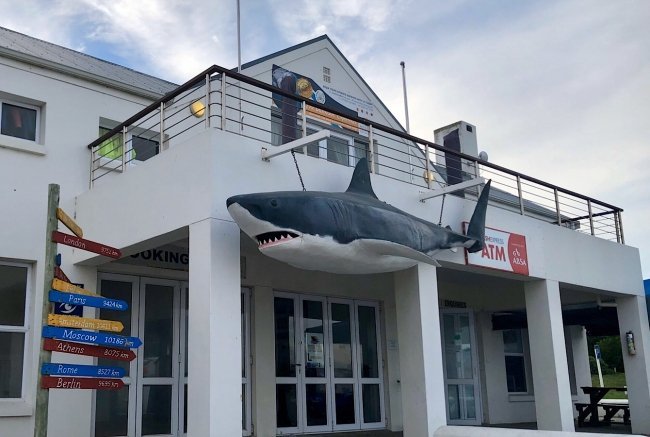 Aboard Dyer Island Cruises' Dreamcatcher, a four-deck vessel itself the size of a whale and with the power of thousands of horses (or should that be sharks?), we depart for a stretch of water called Shark Alley, between Dyer and Geyser islands.

After a while at Geyser, where our senses are lit up by the sight, sound and smell of thousands of Cape Fur seals, we travel along Shark Alley in the hope of catching a glimpse of the famous pointer.

With the Jaws theme playing in my head, my desire to see a great white is assuaged by the sight of a number of African penguins floating nearby.

As we approach the cute birds, onboard marine biologist Miranda explains how this small species of penguin is small in number too, and could even be extinct by the end of the next decade. So the sighting is also sobering and shows the importance of the conservation work Dyer Island Cruises undertakes through its African Penguin and Seabird Sanctuary. 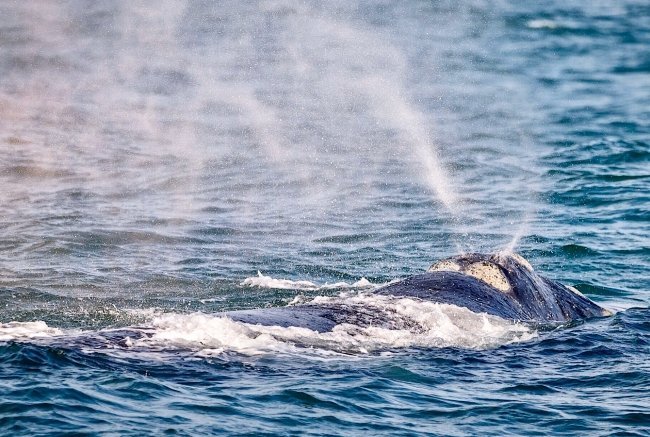 From the smallest member of the Big 5 to the largest, we encounter a pair of whales, specifically a Southern right mother and calf, gliding across the surface of the water like semi-submerged submarines.

Once hunted for their blubber, the Southern rights move pretty well for the 'fattest' whales and as we follow their trail, we witness a number of 'rainblows', which Miranda explains are spouts that catch moments of sunlight to create kaleidoscopes.

We end our hunt without a great white sighting. Perhaps the mighty shark is like the leopard, the most elusive of the safari Big 5. Or perhaps we just used up our good fortune in our numerous other sightings.

Either way, it's a good reason to return to the shores of the Western Cape - as if we needed another one. 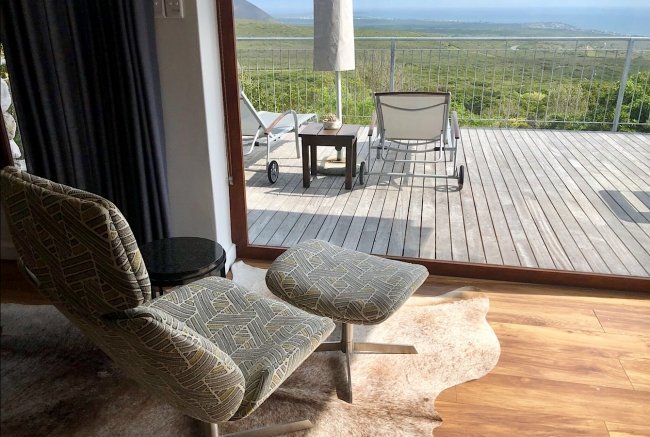