The best surf spots in Portugal

Adventure traveller OCTAVIA DRUGHI takes us through some of the best breaks in Europe's surfing mecca.

It doesn’t matter if you're a seasoned surfer or just starting out, Portugal is one of the most surfer-friendly countries out there. It offers just about everything you could possibly ask for, not just in terms of quality breaks, but also when it comes to its chilled vibes and impressive landscapes.

Portugal is one of the warmest countries in Europe and its beaches are among the cleanest in the world. The coastline is huge - 1,793 kilometres - and is dotted with open beach breaks, concealed beaches, and just some of the best surf spots in the world. It is also the proud home of the largest wave ever surfed. 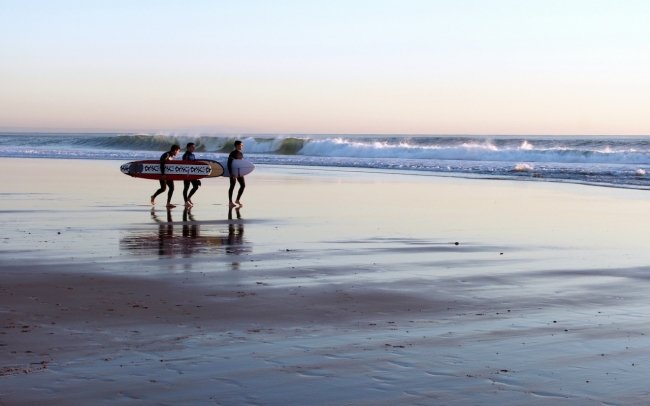 While most people will tell you that autumn and winter are the best seasons to be hitting the waves, Portugal is, in fact, a year-round surfing destination.

The most popular surf spots can be found on the central and southern coasts. However, the north does receive its fair share of rad swells, too. There are many breaks worth checking out when in Portugal, but a few stand out. From gnarly waves to super mellow breaks, here are the best of the best:

Except for the local surfers, who keep defying the cold winter temperatures for a taste of the restless Atlantic, not a lot of people travel to this part of the country for the surf. It's a little ironic too, considering that the very first European surf film was shot on the outskirts of Porto, in Leça da Palmeira, between 1926 and 1927.

Surfing in the Norte Region of Portugal starts with Moledo, near the Spanish border, and ends with Espinho to the south. It is only 113 kms long, but you're bound to find plenty of surf spots along the way, most of them concentrated around the Porto region.

The water temperature is the coldest on Portugal’s coast, going as high as 18°C in summer and down to 12°C in winter. A thick 4/3mm or even 5/3mm wetsuit is recommended during the colder months.

This exposed river mouth break can work at any time of the year. Viana do Castelo offers both left and right-hand waves, and is known for its strong winds, which make it a popular windsurfing destination too.

Perhaps the most important surf spot on the northern coast, Leça is a beach break that is exposed to the Atlantic’s full-force swells. The waves can be very powerful and heavy, but that doesn't discourage local surfers. This A-frame break is a favorite in the Porto region.

The surfing epicentre of Porto is Matosinhos, a sandbar that promises over 300 days of surfing per year. This is perhaps the best place to learn to surf in the Norte Region, with numerous surf schools and waves to choose from.

A barreling machine offering some of the best tubes in Portugal, Espinho is the most famous surf spot in the Norte Region. It can hold waves over 3 metres tall but can get crowded. 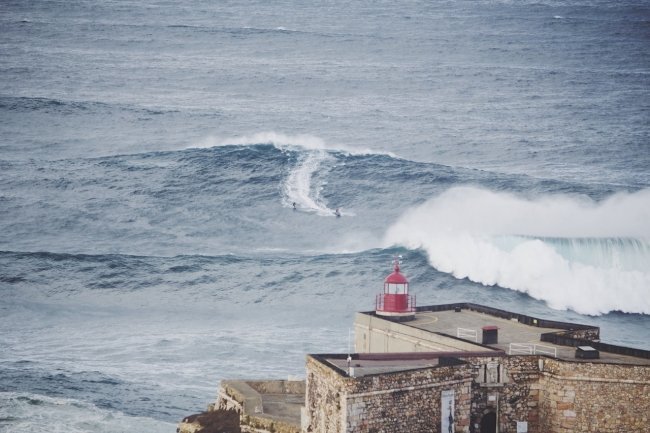 Some of the most consistent and biggest waves in Europe are found on the central coast of Portugal. As in most of the country, peak surfing lasts from autumn through spring, but most breaks can be surfed during summer too, when they're more mellow and suitable for beginner and intermediate surfers.

Come each autumn, Nazaré is the name on every big wave surfer’s lips. To say that this spot isn't for the faint-hearted is an understatement. Even the best pro surfers think twice before attempting to ride this behemoth. There are no room for mistakes.

Nazaré is the biggest surfable wave in the world. Local surfers started trying tow-in surfing at Nazaré back in 2005, but it wasn’t until 2011 that it finally got the recognition it deserves when Hawaiian pro surfer Garret McNamara rode a 23.8-meter (78-foot) wave that sent him straight into the Guinness Book of World Records.

Only the best of the best can tackle this one. And yet, Nazaré gets crowded. When it’s firing, the coast is filled with spectators and the water with jet-skis. A trip to Nazaré is a surfing pilgrimage you must take at least once in your lifetime, regardless of your surfing level.

Located close to Figueira da Foz, Buarcos is a small fishing village that is home to one of Europe’s widest beaches, where three carving waves can be found. There’s the hollow right-hander Tamagueira. Then there’s Mina, a fun reef break that breaks on bigger days. And Teimoso, one of the longest waves in Portugal, offering rides of several hundred metres at any tide.

To the south of the town of Figueira da Foz lies a long jetty that produces some fast and hollow waves. The host of several World Championship tour events (WCT), it's a consistent spot that can offer rides of up to 300 metres. 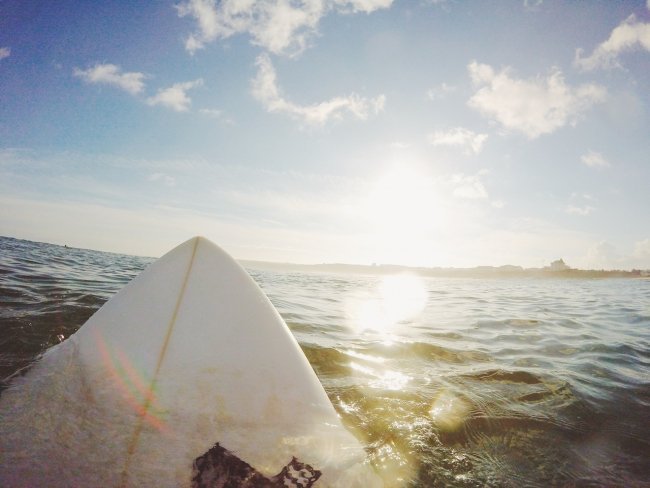 Peniche is a resonant name in the surfing world and Portugal’s most visited surfing destination. Known as the ‘sardine capital of the world’, the Peniche Peninsula is a surfer’s paradise, with its coasts facing both north and south. There’s always a spot to surf, regardless of the time of year. And, “It’s always offshore!”

The name says it all. Right in the town of Peniche, Supertubos is an epic beach break and the most photographed wave in the country. This is Portugal’s very own Pipeline, only without the reef.

Supertubos hosts the annual Rip Curl Pro in October, one of the last events on the World Tour. Its fast tubular waves can get up to 6 metres tall and break over a shallow sandbank.

In 2011, Ericeira was officially declared a World Surf Reserve, the only one in Europe to this day. The reserve extends for 8 kilometres and is home to several world-class waves that, together with the environment and culture around them, will be protected so that future generations can enjoy them too.

Often compared to the likes of Baja California in Mexico or the Gold Coast in Australia, Ericeira is home to some of the best waves in the country and to the biggest surfing community in Portugal. Here are the surf spots you cannot miss:

Many consider this one to be the best wave in Portugal. Long, fast, and furious, this right-hand point break is located just north of Ericeira, in the town of Ribamar, and works best on low tide. It can hold waves of up to 3 metres that break over flat rocks

The heaviest wave in Portugal, perhaps even in Europe, Cave is an ultra-shallow wave that breaks over a treacherous reef bottom. This fast, hollow, and powerful right-hander is also one of the most difficult waves to ride in the country.

One of the most popular surf beaches in Portugal, Ribeira D’Ilhas has been the host of many championships, including the ASP World Qualifying series. It’s considered one of the best rights in Europe, and it’s incredibly consistent, breaking almost all year round. Ribeira D’Ilhas can offer some long rides of up to 300 metres and can hold waves of up to 3.5 metres.

Best for: intermediate to advanced surfers

Pedra Branca is a fun and fast left-hand reef break with some hollow sections. It breaks over a reef, and it isn't recommended at low tide. The beach at Pedra Branca is also the site of two popular reef breaks that are reserved for only the most experienced of surfers: Backdoor and Reef.

Perhaps the best beginner surf spot in Ericeira, this rivermouth beach break has the potential to become the best beach break in Portugal when the sandbars are settled. 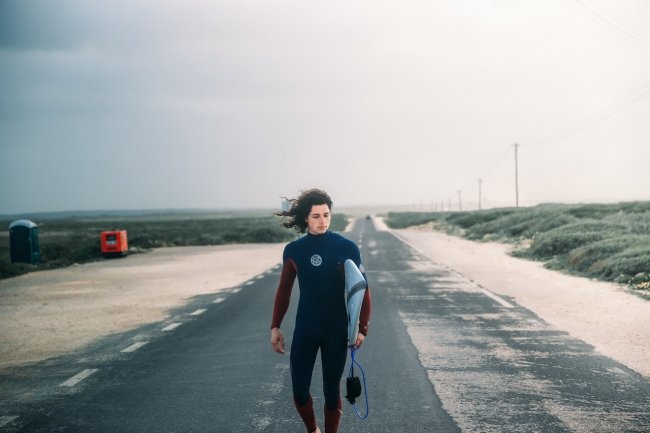 SURFING IN THE ALGARVE

No surfing holiday in Portugal would be complete without at least a quick stop in the Algarve region. This is the warmest and sunniest stretch of coast in mainland Europe, with water temperature averaging 22°C in October.

The Algarve coast is exposed to a wide swell window, which translates into a long and reliable season. There’s always a spot to surf here, never too far from the next. The Algarve is considered a year-round surfing destination. That said, autumn through spring is the recommended time of year, as summers can get hot.

When in the Algarve, you have two options – the west or the south coast. The west coast gets more swell, which makes it a good choice on smaller days. It is also windy, so it’s better to head out in the morning. On the other hand, the south coast gets less swell but is more sheltered from the wind. The best surfing destinations in Algarve are:

Octavia is a travel writer for BookSurfCamps.com. She is a passionate mountaineer, rock climber and adventure addict who feels just as comfortable high on the rocks as she does deep down in the sea.