JOY CLARK reports from Taiwan, where she goes up mountains, through gorges, and to the sea as part of the Food and Discovery Famil.

Today I leave the hotel early and head south by car on a three-hour drive to Hualien on the east coast of Taiwan. The guide assures me that I will feel close to nature and be able to “taste the air”.

Hualien is the largest county in Taiwan, but due to its mountainous terrain has one of the lowest populations (7%) in the country. And it doesn’t take long to understand just that as we get closer and feel the mountains enclosing around us.

We travel through a series of tunnels cutting our way through the mountains. It’s a scenic journey with brief stretches of lovely beaches and a blue Pacific Ocean. 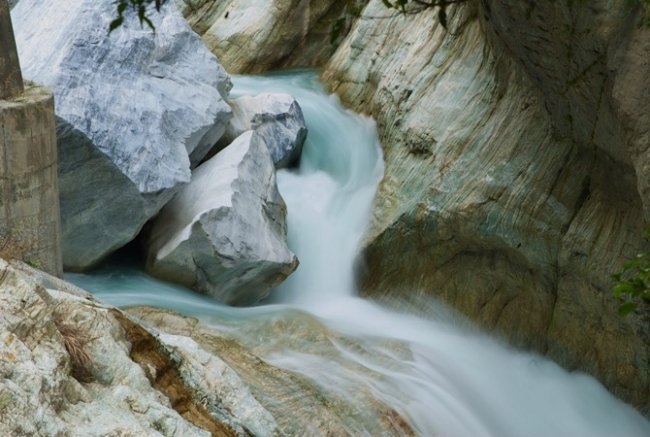 We begin by exploring the Taroko National Park. Our guide tells me we have to stop so he can collect hard hats for us due to falling rocks. I think he is joking (he isn’t) and I wonder - can this be safe? He says it is a safety precaution and because of the weathering of the rocks, small rockfalls could happen. But he assures me it won’t be today!

The Taroko Gorge just blows me away as I make my way along the Swallow Grotto Trail. The trail is easy to walk, and you can’t help but wonder how nature can deliver such beauty. The rock layers are mostly marble and the gorge was formed after the river cut through the layers of marble for millions of years. We head back to our driver – hats in hand and no falling rocks to be seen. The guide was right.

We move on to walk the Shakadang Trail – a round trip of 3km. The trek is winding and after the first curve we come upon a crystal-clear turquoise blue pool of water below a shear cliff. Surrounding the water are some enormous boulders - and I dream of sunbaking on these and diving into the clear water. Unfortunately, the drop from where I’m standing would make getting down impossible – and besides, it’s now starting to rain for the first time on the trip.

Tonight, I’m staying in an eco-style boutique hotel, the Silence Manor, in the township of Ruisui. It feels like I’m in the middle of nowhere, surrounded by lush gardens, fruit trees and lofty mountains.

The rooms are large, light and warm, with the added bonus of a deep, hot spring bath in the bathroom – very zen. I definitely have to fill that up.

Dinner is at the hotel and is famed for its presentation (there is no menu) and use of ingredients from the hotel’s garden. The dishes are fantastic too, with beautiful flavours - it was four courses of heaven. 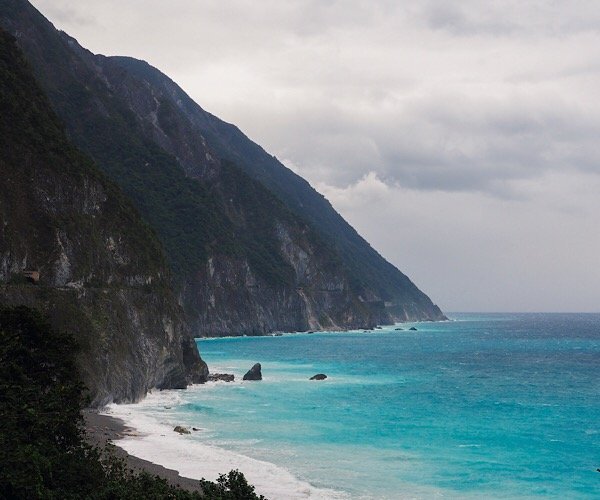 The next morning we leave for the Hualien Fengbin Sky Trail, a 150-metre sky trail that hangs out over one of the limestone cliffs above the ocean. There is a 20-metre section that is transparent, built from steel beams and tempered glass. This will allow those, who are not too afraid, to look through the glass to the shore below. What an amazing experience. Part of the trail is a fairly narrow path cut out from the cliff face that had connected the local villages during the Japanese period. The walk also takes in part of a cliff edge section of the old highway. If visiting, spend as much time as you can around this area - the coastline is incredible.

After lunch, I’m ready for more sightseeing and we set off for Qixingtan Beach at the north of Hualien City, where the mountains meet the sea. There is no sand, just the most amazing pebbles in all shapes and sizes. I feel the need to collect some as they are so tactile, but resist the urge as not only is it not permitted, I have to remember how many kilograms of luggage I am allowed on the plane home. It’s another hot (34 degrees) day and looking at the blue water I wish for a cool dip, but swimming is also not permitted on the beach, so I have to be content with dipping my toes in the water.

We move on to the Clear Water (Qingshui) Cliffs in Sioulin Township. These extraordinary cliffs were ‘created by a collision between the Philippines and Eurasian tectonic plates around 6 million years ago.   As the earth crust was uplifted, the island of Taiwan was formed and at the point where the plates collided the long stretch of cliffs was created’. The sight of these sheer cliffs with high mountains above, and the deep blue ocean below, is truly staggering.

It’s a very early start in the morning taking the train back to Taipei. A 2.5-hour journey that in between sights unseen will deliver a total of 31 tunnels through the winding and steep cliffs.

The writer was a guest of the Taiwan Tourism Bureau/Taiwan Visitors Association.