Get a sneak peek of Tonga’s newest island

This (as yet unnamed) island is one of only three to be born in the last 150 years to survive longer than a few months. Find out why NASA’s so excited by it.

When an island suddenly appeared in January 2015, the folks at NASA were paying attention. Not only would it help them to understand how new islands are born and grow on Earth, but there was hope that it would offer up some clues as to how volcanic landscapes interacted with water on Mars.

With no official name (yet), the Tongan island is referred to by the combined names of its neighbours, Hunga Tonga-Hunga Ha’apai (or HTHH for short).

According to a NASA blog, while there’s no map of the new island, research scientist Dan Slayback and Jim Garvin of NASA’s Goddard Space Flight Center in Greenbelt, Maryland and Vicki Ferrini at Columbia University have been watching it from satellites since its birth, trying to make a 3D model of it as it changes over time to understand how much material has been eroded and what it is made of that makes it partially resistant to erosion.

Slayback eventually made it to the young island and came across some surprises.

“We were all like giddy school children,” Slayback of their visit.

“Most of it is this black gravel, I won’t call it sand – pea sized gravel – and we’re mostly wearing sandals so it’s pretty painful because it gets under your foot.”

“It’s pretty flat, but there’s still some gradients and the gravels have formed some cool patterns from the wave action.” 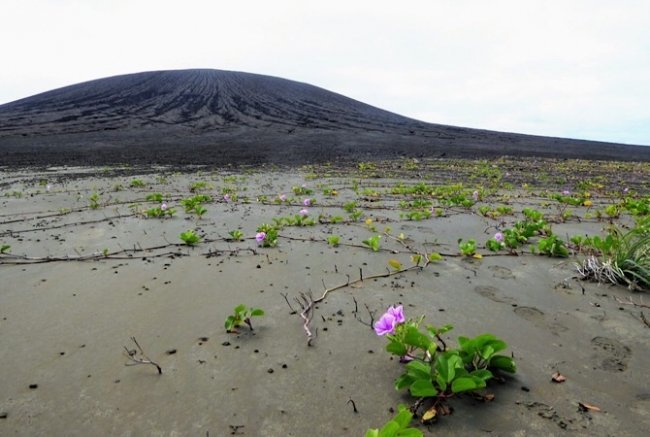 Slayback was baffled about the origin of some sticky clay mud (“It’s not ash,” he said), but he was happy to spy vegetation beginning to take root on the isthmus connecting the island to its neighbour, and patches on the volcanic cone’s flank.

And while it may be some time before resorts are built and tourists welcomed, hundreds of nesting sooty terns have taken up residence in the deep gullies etched into the cliffs surrounding the crater lake. So I guess it’s theirs for now.