Exploring America’s wilder side at Yellowstone

SASHA PCINO takes us beyond the bustle of the big apple, the glitz and glamour of LA and the bright bulbs of Vegas.

Yellowstone National Park is a handsome curiosity of geology; and like all good-looking things in nature – golden frogs, lionfish and blue-ringed octopuses – it’s dangerous. In fact, it’s one of the most dangerous parks in the world; despite the safe ploys of lodges and boardwalks, it is nature in its rawest form: a super volcano. Nevertheless, that doesn’t stop masses of sightseers making nature’s greatest pilgrimage every year.

I’m about to be one of these pilgrims. I’m staying at the Buffalo Bill’s Antlers Inn in Cody, Wyoming; the town is named after Colonel William Frederick “Buffalo Bill” Cody for his part in its creation. Cody is a popular place to stay as the park is predominantly in Wyoming, though it also extends to Idaho and Montana. As I turn left off 17th Street on to Sheridan Avenue, I feel like I’ve trespassed on to a modern western set. I’m on my way to Granny’s Restaurant for a home-style all-American breakfast. It’s just like the movies. The waitress re-fills my coffee continually until I’m not sure how much caffeine I’ve consumed. Heart palpitations could be imminent. 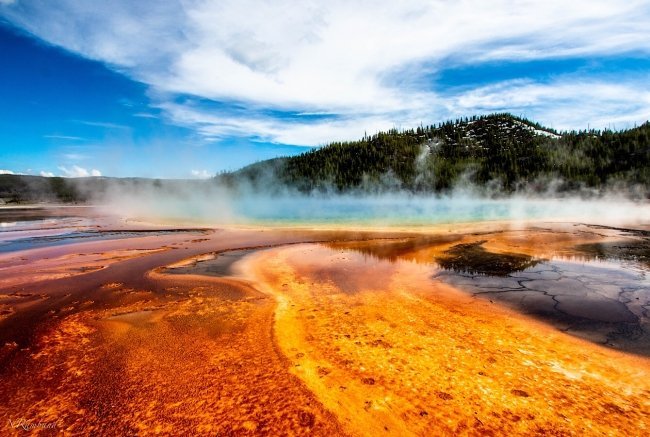 I look at my watch. Time to go. I return to the inn where my tour bus awaits. There’s a chill in the air. It’s mid-September. Autumn has arrived. Not by American standards, but by Australian standards. I must look a curiosity for I, not one used to cold climates, was not dressed that appropriately. I, a naïve Australian, had not prepared for the temperature to plummet to 1 degree Celsius and I did not think it would snow at the start of autumn. I had also spent time in the south before heading to Wyoming.

From the south where the heat has an unyielding quality about it like at home. So my putting on everything in my suitcase, which made about three layers, and my black rubber boots, I went into the wilderness, well, the guided wilderness anyway.

The bus embarks for a daytrip to Yellowstone National Park at 7.30am. It takes just over two hours to reach the park; I sleep for the first hour and gaze intently out the window for the second. The drive to Yellowstone was filled with snow covered mountains. Having never seen snow, I long to eject myself from the moving vehicle and touch it; other Australians want to stop and touch it too. There is nowhere the bus can stop but our guide says we will have the opportunity to see it the next day. To my disappointment, the snow has disappeared on arrival at the park.

Our first stop is Old Faithful, an aptly christened and highly predictable cone geyser, erupting every 90 minutes or so. An acrid stench assaults my nose: sulphur; the odour of rotting eggs.People are crowded on the boardwalk,cameras poised so they don’t miss the postcard shot. Signs everywhere state: Danger. Fragile thermal area. Keep out. But people veer off the track. Standing here, save for the warning signs, I forget that this region is an active super volcano. After a few minutes, the amateur photographers glance at their watches before looking back up and refocussing their lenses. I overhear two people next to me talking; they’re worried it won’t erupt. But it’s not called Old Faithful for its disloyalty. Steam rises. Boiling water shoots into the air like a fountain and slaps to the ground. Cameras are clicking. The cycle continues. A final expulsion and then its sojourn commences.

We have lunch at the Old Faithful Lodge Cafeteria before returning to the bus and heading to the Midway Geyser Basin; we spot an elk on our way.

Upon arrival at the basin, the first thing I notice is the smell; it’s more pungent here and I can’t help but jostle my scarf up so it covers my nose. I march, with the crowds, along the boardwalk. The same signs scream warnings but they do not deter people from leaving the path. I treat this path like the yellow brick road. The Excelsior Geyser Crater, formerly known as the Excelsior Geyser, is a dormant fountain-type geyser. Steam rises from its acrid, boiling temperature. Its vibrant blue and green colours possess an opal-like quality.

I continue to the legendary Grand Prismatic Spring, the largest hot spring in the USA and the third largest in the world. The fragile red-orange crust frames the spring’s glowing grand volcanic aura of opal-like blue-green. There is a bench and everyone is trying to stand on it to get the best view of the colours. The circular arrangement looks artful as though nature approached its construction in the same way Van Gogh did one of his masterpieces. The colour is intense. It’s like a rainbow after a storm, but on an extreme scale. This is the winner, the postcard shot.

Next is the Opal Pool, a hot spring; it looks like the shade of blue found in opals. After that is the Turquoise Pool, which also lives up to its name, with its lively turquoise colour: the colour seems more vibrant than the opal pool. We board the bus and head to Gibbon Falls, a waterfall on the Gibbon River.

Gibbon Falls is majestic. The white of the water spreads like streaks over the rocks and downwards. It has a drop of about 26 metres.

We continue to Artist Point, an overlook point on the edge of a cliff on the south rim of the Grand Canyon of the Yellowstone in Yellowstone National Park.

After a day of curious exploration, we start the two-hour journey out of the park and back to the inn. On our way, the driver spots a grizzly bear by a river. The driver pulls over for people o take photographs but warns everyone to stay near the bus. Everyone runs towards the river. A local, standing nearby, informs the camera clad clan that the bear could in fact dart across the river, which was not very wide, and attack them. Everyone backs off.

We continue our journey home, spotting a black bear out the window. We don’t stop for this one. Though the bears were the highlight, we also see elk, bison and a bighorn sheep. I return to Cody for the night. We then make our way to Jackson Hole the next day, stopping for a break at Yellowstone National Park. It’s one-degree Celsius. Snow is falling. We finally get to touch it. It’s cold but freezing for an Australian from Queensland, the sunshine state.

The Australians, mainly the ones from the north like myself, make snowballs and throw them at one another. We get a hot chocolate to warm up before heading back onto the bus and saying goodbye to this handsome park.

We continue our adventure – and an adventure it has been. Noses pushed against the fogging glass bus window, we see two bears walking past dressed in a cape of snow.

My highlight was the Grand Prismatic Spring; the colours were not a performance for man for the world requires no spectators in its show. Such a realisation makes one think there must be more than just the day-to-day domesticity of life as we, mankind, know it.

• The park is popular all year round, with each season offering a unique view. According to U.S. News & World Reports, June to August is busiest due to school holidays; and September to November is good as the weather is mild and it’s not as busy. I went in mid-September; the temperature had a top of 13 and a low of -2. For details on the weather at different times of the year: travel.usnews.com

Cody, Wyoming is a good town to stay in if you’re planning on doing a day outing to Yellowstone National Park.

• Buffalo Bill’s Antlers Inn (this is where I stayed); a 24-hour laundromat is nearby: antlersinncody.com

• There are also lodges at Yellowstone National Park: yellowstonenationalparklodges.com