The Rocky Mountains: In the Footsteps of Lewis and Clark

When it comes to legends, America’s Rocky Mountain states are bursting with them. From native American legends like Sacagawea and Sitting Bull, early explorers Lewis and Clark and even mythical legends like Bigfoot. 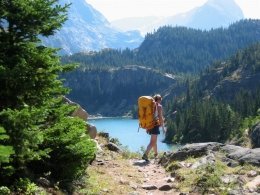 Montana’s Glacier National Park is a vast wilderness of stunning mountain peaks and valleys wooded with evergreens. The enormous national parks in this part of the country really allow you to experience the American wilderness as the original European explorers did.  Conservation policies introduced by another American legend, president Theodore Roosevelt, mean that there is still plenty of wildlife.

Your kids will be familiar with all of these legends by the way. They all feature in “A Night at the Museum”.

Glacier is home to bears and mountain lions and if you believe some of the stories told around campfires, mythical semi-human beasts.

On our entry to the park we’re presented a brochure with detailed instructions on hiking in bear country, with the welcoming heading; “Enjoy Them at a Distance”.

We are advised to make noise, especially when approaching blind corners, dense shrubs and streams. “A loud shout every few minutes is more effective than wearing bear bells.”

Bear bells? If possible we’re told, never travel alone on park trails and watch out for signs of bear activity. When camping, keep a clean camp, ensuring all food is properly stored and all rubbish is placed in bear-proof containers.

The Carthew/Alderson trail takes in Carthew and Cameron lakes and surrounding peaks. The initial uphill climb takes you to an elevation gain of 2255 feet and is followed by a 3360 feet descent and the total distance covered is 12 miles.

Lewis and Clark started their epic 8000 mile journey through the American wilderness in 1803 and during their 28 months on the trail they ate 375 elk. Boiled, roasted, smoked and jerked, it’s estimated their Corps of Discovery went through eight pounds of elk 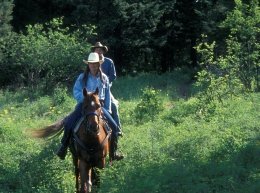 Our journey is considerably shorter than this but it is still possible to eat elk meat should we so choose. Buffalo (bison) burgers are also on the menu.

Lewis and Clark’s Corp of Discovery would not have had access to their much needed horses had it not been for their employment of another American legend, their interpreter and guide, Sacagawea, a 14 year old native American. This amazing young woman guided them through to the Pacific carrying her young baby on her back and en-route successfully negotiated the purchase of horses from her native tribe, the Shosones.

Sacagawea turned out to be incredibly valuable to the Corps as it travelled westward, through the territories of many new tribes. Some of these Indians, prepared to defend their lands, had never seen white men before. As Clark noted on October 19, 1805, the Indians were inclined to believe that the whites were friendly when they saw Sacagawea. A war party never travelled with a woman, especially a woman with a baby.

As we gather around the campfire after a sunset horse trail ride we learn of another local legend as our native American host Nancy Gaynor recounts her recent experience with Bigfoot. At first we chuckle as she tells her story thinking that she’s joking but soon realise she is completely serious.

As she tells it, a guest was practising his oboe here one night when he heard a noise – “it sounded like a low growl” – and smelled a bad smell “like really bad BO”. According to Gaynor, these clues can mean only one thing: Bigfoot was about.

She consulted Whitefish’s resident Bigfoot expert, Robert W. Morgan, who founded an organisation devoted to all things Bigfoot after spotting the creature himself in 1957. He told her Bigfoot likes to braid horse manes.

“I have a paint horse and I went out and its mane was braided,” Gaynor says matter-of-factly.

“He also told me to put a feather in it so that if Bigfoot called he could take it as a present. He told me to stick it in there good, so I used binder tape. The next day it was gone – I don’t know what that means.”

Isn’t it scary thinking Bigfoot could be out there nearby?