I have this awesome dress I picked up from Good Will in San Francisco. It was the ultimate Op Shop find and only set me back $13. So when I spilled sauce from one of  Vancouver’s famed Japadog stands down its front, I thought it was time to do some laundry. 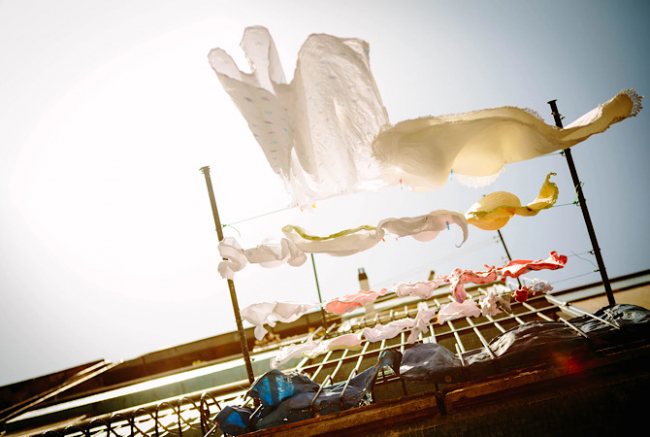 The downside to packing light is that you will inevitably have to do laundry, but hotels can charge an absolute mint to do it for you. It would cost me $20 to launder my $13 dress. So I had two options. If you’re travelling with others, you pool your clothes together and head to a laundromat (easier in some countries than others). If you’re alone or have a particular fondness for an item of clothing, it’s to the hotel bathroom basin or tub for you.

I usually travel with a sachet of laundry powder or laundry bar (this is relatively easily to pick up in Asia and the US, but if in doubt, BYO). And then I spend a night doing laundry in the bathroom.

When I travelled on the cheap this was actually easier. Hostels and cheap hotels expect as much from their guests and either have laundry facilities or at the very least a retractable washing line over the bathtub. But on a business trip when I was staying in a rather posh hotel for an extended period with no laundromat in sight, I was limited.

So I scrubbed my clothes in the basin, wrung them out in the bathtub and hung them on clothes hangers and towel racks.

We’re used to seeing glam shots of celebs as they holiday around the world and Aussie Rebel Wilson is no different. Travelling while the rest of us have been locked down, Wilson is currently filming in the UK. But it’s not all glitz and glam.

The Pitch perfect star posted a picture of herself next to her hotel bath to her instagram stories. And while that may sound sexy. It really wasn’t.

"This is me doing washing in hotel bathtub."

See even big stars don’t want to be paying those fees. Or they might prefer to launder their underthings themselves...