I’VE ALWAYS believed that you can tell what kind of hotel you’re checking into by the reception you receive at the front desk on arrival.

So when I was handed a warm, gooey, aromatic, delicious chocolate chip cookie along with my key to room 258 at the Chateau on the Park – Christchurch, a DoubleTree by Hilton, I knew I was probably in safe hands. 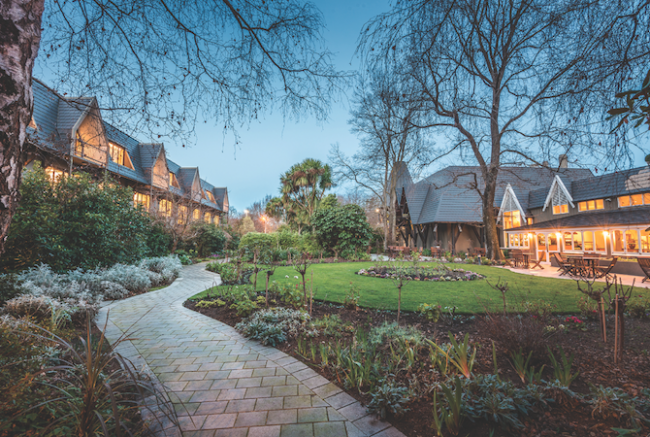 “We like to think that with our welcome guests almost feel like they are coming home,” said David Wain, Hotel Manager. ”That’s what we stand for at DoubleTree. It’s a relaxed, friendly environment and we treat people as human beings.”

This iconic Christchurch property opened in 1975 and hosted a dinner for a visiting Queen Elizabeth in 1977. Its former restaurant, named Camelot in deference to the baronial architecture, was one of the places to dine in the city. Now it’s earning a new reputation following the rebranding in September to DoubleTree, the fastest growing brand in the Hilton stable.

“We have incredible local patronage, mainly from our restaurant,” added David. “The population in Christchurch is now higher than it was pre-earthquake and there’s a new found confidence in the city. It’s got its mojo back and there’s a real enthusiasm about what the future will bring.” 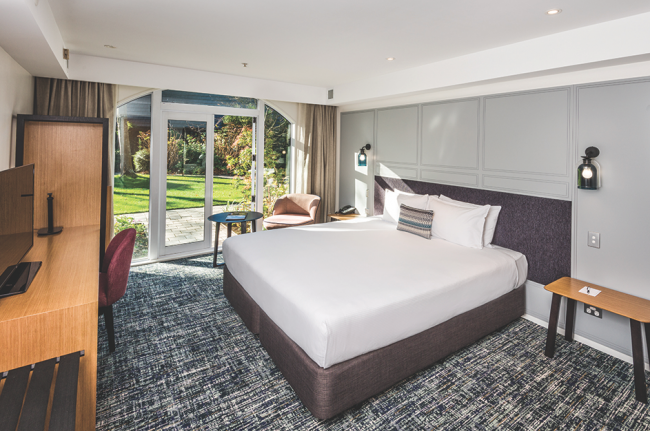 Having munched my way through the welcome gift, I was keen to see where the $13 million spent on phase one of the refurbishments had gone. Our room overlooked the two hectares of award- winning gardens for which the property is famous and was spotlessly clean and comfortable. The bed was super comfy and with new fixtures and fittings, the room was immediately welcoming.

The hotel has 192 keys in total with money also spent upgrading the seven function rooms, the Den Bar and the fitness centre. Phase two is due to kick off next year and will include refurbishments to the Garden Court Brasserie, its kitchen and the administration offices. There’s an outdoor heated swimming pool and being on the edge of Hagley Park, the hotel is just a short walk or drive to the city centre. Having learned of its reputation for great cuisine I was eager to tuck in and found some cracking offerings from the eclectic brasserie menu. I opted for the chick pea and potato fritters while my wife chose the blue cod fillet, washed down with a Rabbit Ranch pinot noir (David’s recommendation). We narrowly avoided a marital incident when the desserts arrived by agreeing to share the butterscotch and Baileys cheesecake along with the raspberry crème brulee, both of which were delicious.

So what is David’s message to those who might still be unsure about coming here?

“Don’t discount Christchurch. It’s a beautiful city, despite what the CBD is still going through. We’ve got some great tourist attractions and it’s an incredible hub for the South Island. And as a stopover destination you just can’t beat it.

“Now Hilton is in town and we’re excited to be here. We don’t have a crystal ball but we are very confident about what the next five or 10 years might bring.”