How does Japan plan to deal with tourists' tattoos?

Have tattoos? If you’re heading to Japan, prepare to cover up.

In Japan, tattoos have long been taboo, thanks mostly to their association with members of organised crime gangs. 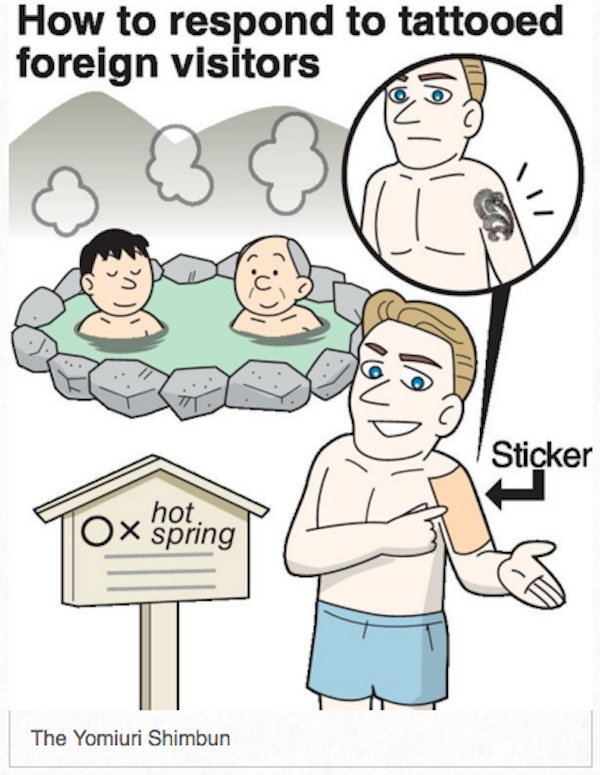 In fact, tattoos are so frowned upon, that many ryokan inns (traditional hotels) and bathhouses around Japan still refuse entry to foreigners brandishing their tatts.

However, with the number of international tourists (and indeed those with tattoos) ever-increasing, Japanese authorities are taking steps to ensure travellers with ink work don’t leave Japan with an unfavourable view of the country.

According to The Yomiuri Shimbun, the Japan Tourism Agency wants the nation’s famed ryokans and bathhouses to distribute or sell stickers to cover tattoos, allowing customers to enter bath facilities unencumbered.

How to camouflage your tourist status with a tatt

Would you get a tattoo for a round-the-world ticket?

By doing so, it is hoped the number of cases in which foreign visitors are refused admittance to bath facilities because of their tattoos will be greatly reduced.

As well as stickers, JTA is encouraging tattooed visitors to bathe when fewer families are around and also suggest renting private bathing rooms.

A whopping 56 percent of facilities including inns and hotels did not allow tattooed people to use baths, while 13 percent said they allowed customers with tattoos who were wearing stickers (or who took similar measures) to use their facilities.