Inside the ultimate hotel room for train nerds

If you love trains, Tokyo must be some sort of rail Mecca.

Shinkansen, or bullet trains, aside, the city’s vast rail networks be they underground or overground are a sight to behold and an experience to savour.

But now train aficionados can also jump on a train simulator in Tokyo’s Asakusa Tobu Hotel. 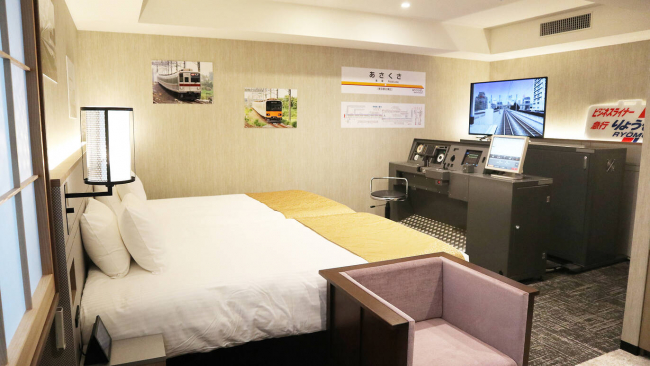 The hotel is celebrating its first anniversary and to celebrate, it has installed a Tobu Railway simulator in one of its rooms.

The room is replete with train bedding and signage. The toilets, however, are likely much nicer than those found on trains, but remember it’s Japan, so even those are usually pretty good.

For ¥10,200 per session you and another person can hire the room from 1pm to 5pm and make try your hand on the full-scale model of the Tobu Railway 50070 series control panel. This is what   Tobu-Tojo Line drivers use in training.

There’s even a screen that shows your almost-realistic progress.

But be warned it’s not as easy as it looks and you might need another few sessions. But how many people can say they drove a train…in a hotel?