No it isn’t Buckingham Palace, but it isn’t far away

Anybody who’s been to London knows Admiralty Arch, but perhaps not what lies within. Well, that answer will soon be a Waldorf Astoria hotel. 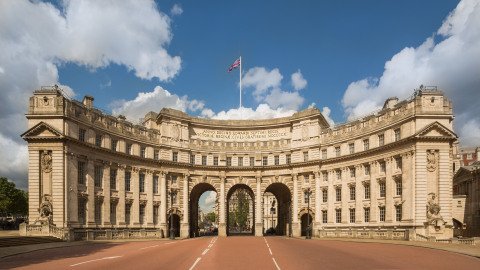 Yes, one of the UK capital’s most recognisable buildings, and monuments, will become the Admiralty Arch Waldorf Astoria London in 2022, after it was revealed the Hilton-owned hotel group would be making its debut in England.

Situated at one of the city’s most prestigious addresses, between The Mall (which runs to Buckingham Palace) and Trafalgar Square, Admiralty Arch housed the official residences of the First Sea Lords and clandestine wartime intelligence, and has hosted luminaries from Sir Winston Churchill (whose office was within the arch) to James Bond author Ian Fleming.

The new hotel will open after an extensive refurbishment programme that will restore the iconic landmark’s historical features, and will feature 96 rooms as well as three restaurants.

Plans also include a rooftop bar with “sweeping views across London’s skyline”, event spaces and a state of the art spa. There will also be a handful of private residences and a members club.

“Projects of this calibre are rare, and Admiralty Arch Waldorf Astoria will provide a truly unforgettable hospitality experience when it opens to guests,” Hilton president and CEO Christopher J. Nassetta said, after the agreement was announced by Prime Investors Capital Ltd, who bought the building from the British Government in 2015.

“Waldorf Astoria has a legacy of protecting and enhancing historical buildings, from our flagship hotel in New York, which is currently undergoing a comprehensive refurbishment to protect the art deco building for future generations, to this incredible property in London.”