Melbourne mother and daughter among those unable to reach their hotel

For the seventh straight night, pro-independence protestors took to the streets of Barcelona Sunday evening, as anger over the jailing of Catalan separatist leaders shows no signs of abating. 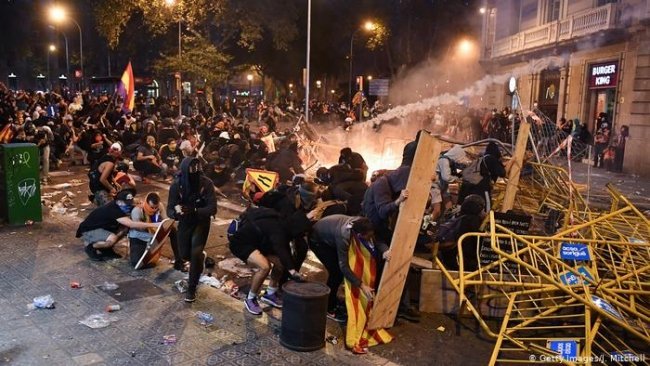 According to Reuters, a large crowd blocked a road close to the Spanish government headquarters in Catalonia, while a smaller group closed a major avenue near the city centre.

But in good news for travellers, there were no signs of violence like the clashes that shook Barcelona in the preceding days, when masked protestors clashed with riot police, forcing the arrest of nearly 200 people.

Melbourne holidaymaker Sue Horwood was lucky to even arrive in the city. After touching down on Friday, she said the city’s main airport closed shortly afterwards.

Horwood, who is travelling with her mother, told Traveltalk they were then unable to access their apartment hotel, which is located near the famous Las Ramblas avenue that has seen much of the civil unrest.

Consequently, the pair were forced to stay in an Ibis hotel “in the middle of nowhere” for two nights before finally reaching their original accommodation on Sunday.

Horwood said Friday night had been the worst, when after 6pm everything started up. But by Sunday night, things seemed more “peaceful”, although there were still helicopters flying around.

Whist city officials estimate the physical damage to property to be in the millions, the toll on tourism, which has experienced its own backlashes in the city in recent times, could be higher.

“People can’t take their children to school, they can’t open their businesses,” said Barcelona-born Albert Rivera, who organised a counter-protest on Sunday, calling for an end to the violence.

“We need a Spanish government that protects the weak.”