Fijians had days to prepare for storm

After it smashed Vanuatu as a category-five storm on Monday, Tropical Cyclone Harold has struck Fiji’s largest island Viti Levu.

By Wednesday afternoon, Harold had caused dangerous flooding in the country and destroyed buildings on the west coast of the island. 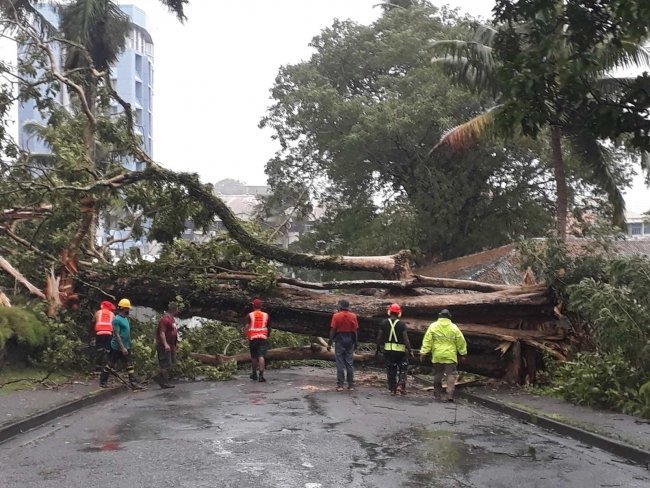 A large tree brought down in Suva (Image Ministry of Forestry)

Downgraded to a category four storm before reaching Fiji, the cyclone forced the closure of all roads on Viti Levu, which is the home of capital Suva and where most of the country’s population resides.

Fiji has 15 confirmed cases of COVID-19, but so far no fatalities.

In a video posted on social media early on Wednesday, Fijian Prime Minister Frank Bainimarama said “the worst of TC Harold will strike Fiji through this afternoon … Flying debris and floodwaters can be deadly. All Fijians should stay indoors unless directed to evacuate.”

According to The Guardian, Harold formed near the Solomon Islands, where 27 were swept off a ferry in rough seas and are feared dead.

The storm hit Vanuatu on Monday, with authorities still assessing the damage the cyclone caused on the country’s outer islands.

In some places, officials fear the damage could compare to 2015’s Cyclone Pam, and that the country faces a 12-month recovery, the ABC reported.

While there have been no reported loss of life, images of upended buildings and flooding have emerged on social media.

The hardest hit islands of Vanuatu appear to be Espiritu Santo, Malo and Pentecost, among others.

Harold is forecast to hit Tonga by Friday.