The Walshe Group held what it called its first joint destination updates today (Wednesday), with presentations by the tourism organisations of Hawaii, Abu Dhabi and New York City. 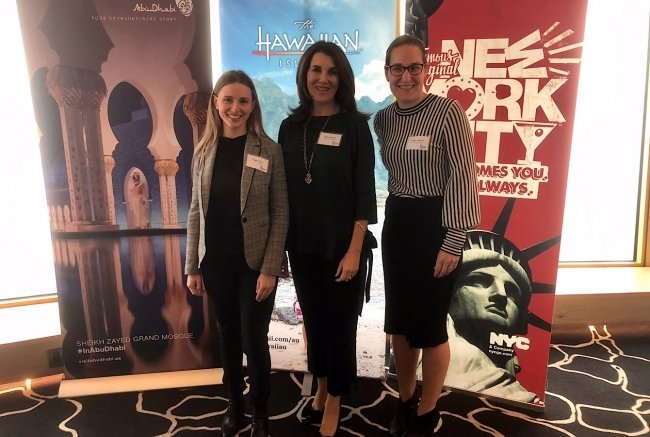 Held at Studio Sydney Tower, the intimate but informative gathering for around 20 travel agents was also an opportunity for the three popular destinations to thank its loyal trade partners.

In its presentation, Hawai’i Tourism Oceania country manager Giselle Radulovic said Australians stayed an average 9.5 days in the Aloha State, a ‘solid’ stat but just short of the 10-12 days it recommends Aussies stay in order to visit the outer islands.

Hawaii’s presentation also included accommodation updates on Oahu, the island of Hawai’i, and Kauai, which Ms Radulovic said was all about rejuvenation, and where “no buildings are taller than a coconut tree”.

With Abu Dhabi boasting 200 natural islands, Ms Ward talked up the emirate’s beaches, as well as Yas Island, the Louvre, which just turned one, and the Sheikh Zayed Grand Mosque.

Hotels like Qasr Al Sarab and the 7-star Emirates Palace, where one can order a 24-carat gold leaf cappuccino have also helped lift Abu Dhabi’s hotel offering “to a whole other level”, she said.

To make Abu Dhabi even more appealing, flag carrier Etihad is now offering a free two-night stopover at your choice of 20 hotels.