Organisation launches its global plans for the next three years

Driving tourism to the regions, promoting off-season travel, sustainability and highlighting the variety of experiences on offer across the island of Ireland.

These were just some of the main initiatives unveiled by Tourism Ireland (TI) officials at a special trade and media briefing in Sydney on Tuesday. The event was held to launch TI’s new three-year marketing strategy.

“The Irish tourism story over the last number of years has been a very positive one globally,” added Ms Metcalfe.

“In 2019, we welcomed 11.2 million visitors, spending €5.8billion (approx. $AU9.4billion). For an island that is home to just over six million people, that’s pretty good going.”

Ms Metcalfe said TI’s targets for 2020 globally were to grow overseas revenue by three per cent and tourism arrivals by two per cent.

By 2022, the organisation hopes to have grown visitor numbers to 12 million (a seven per cent increase over the three year strategy) and revenue to €6.5billion (approx.$10.5billion), which is a 13 per cent increase. 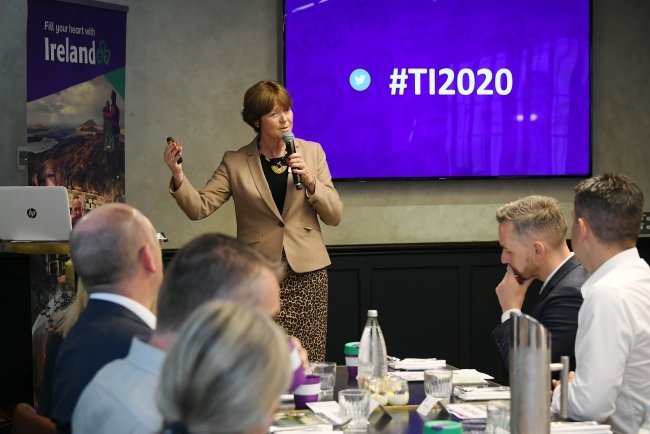 Alison Metcalfe at the launch

“We’re looking to grow revenue ahead of volume and that’s because tourism to the island of Ireland is a really important boost to the economy. One in 10 jobs is supported by tourism, that’s some 325,000 jobs on the island," Metcalfe said

“We’ve had tremendous success over the last seven or eight years but like many destinations we want to make sure we spread the economic benefits of that success so that every part of the island of Ireland gets to benefit from international tourism."

“Just growing numbers for the sake of it is not the end goal. We want to build sustainable growth and as a result of that Tourism Ireland has adopted a set of sustainable marketing principles.”

Ms Metcalfe said one of the principle aims of the new tourism strategy would be to market five regional brands: The Wild Atlantic Way, Ireland’s Ancient East, Hidden Heartlands, Dublin and a new brand in Northern Ireland, Embrace the Giant Spirit, which will be launched over coming months.

“Each of these brands offers a variety of experiences. There’s a huge amount of work going on on the Northern Ireland side developing a lot of new experiences so it’s going to give everybody more to sell, more to promote and more stories to tell.”

Visitors will also be encouraged to visit Ireland in the off-peak seasons, with a number of festivals and events taking place in less popular periods. Emphasis will also be placed on the heritage, culture, culinary experiences, soft adventure, landscapes and screen tourism available across the country.