It famously puts the rose in every cheek. But the cost of Vegemite at a Sydney Airport retailer has put the red (read anger) in a lot of faces after it was revealed in an online forum that the shop was selling the Aussie icon at more than double its normal price. 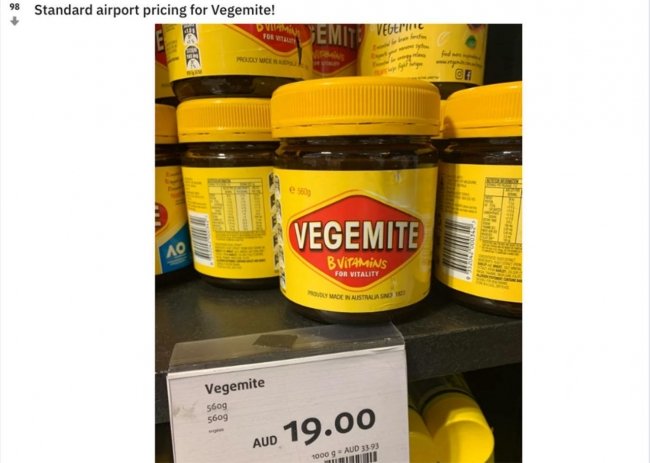 Now, I recall paying US$17 (AU$24 now, around AU$17 back then) in 2012 for a similar-sized jar of the spread from an Australian-themed shop when I was living in San Francisco. I coughed up as it was for a very special someone’s birthday. And hey, we were in Northern California.

But I’d never expect to pay that sort of price on Aussie shores.

The issue was brought to the public’s attention after a photo of some 560-gram Vegemite jars with the caption “Standard airport pricing for Vegemite!” above a price tag of $19 appeared on Reddit.

The same sized jars go for around $8 in Coles and Woolworths, and the mark-up didn’t go by unnoticed by those on the forum.

“This is criminal,” one wrote.

Another added, “Airports are some of the most lucrative retail realestate”.

In a statement to Yahoo News Australia, the Australian Competition & Consumer Commission (ACCC) said it had no power to regulate food or grocery prices anywhere, including at airports.

Maybe that’s why some eateries at the airport resort to spreading their vegemite like this.