The most remote destinations are on our doorstep

Australians have long been told how far away they are from ‘everything’. Here’s why that should be music to our ears…

With social distancing now (and likely for some time to come) a consideration for most of us, travellers will be seeking out quiet destinations like never before.

Luckily for Australians, the three most remote vacation destinations are right on our doorstep, new research by Canada eTA has found. According to the data, which ranked 169 countries by comparing annual tourist arrival numbers with population density, New Caledonia is the most ‘remote’ location in the world, scoring 92 (out of 100).

With a population of just 284,000, Australia’s closest Pacific neighbour welcomes 120,000 tourists a year.

Following right behind the French Territory with a score of 91.4 is the Solomon Islands, which has a population of around 653,000, but receives just 27,900 tourists per year.

Making it a trifecta for the region, nearby Vanuatu came in third with a score of 87.5. Vanuatu’s population of 293,000 welcomes some 116,000 travellers each year.

On population density alone, Australia, Iceland and Canada ranked second, third and fourth respectively, behind the least populated country in the world, Mongolia.

“It is crucial that we begin travelling again in order to help not only the travel and tourism industry to recover and prevent more job losses, but to also help the countries where tourism contributes a significant amount to their GDP,” says Jayne Forrester, Director of International Development at Official-esta.com.

“A bustling and busy city break was once a popular destination, but some people may now be looking for a more remote location to enjoy a quiet trip.

“We know that choosing to travel again will be a big step for most people, but have some piece of mind knowing these top destinations are perfect for a quiet, low-populated trip and hopefully will inspire your next adventure.” 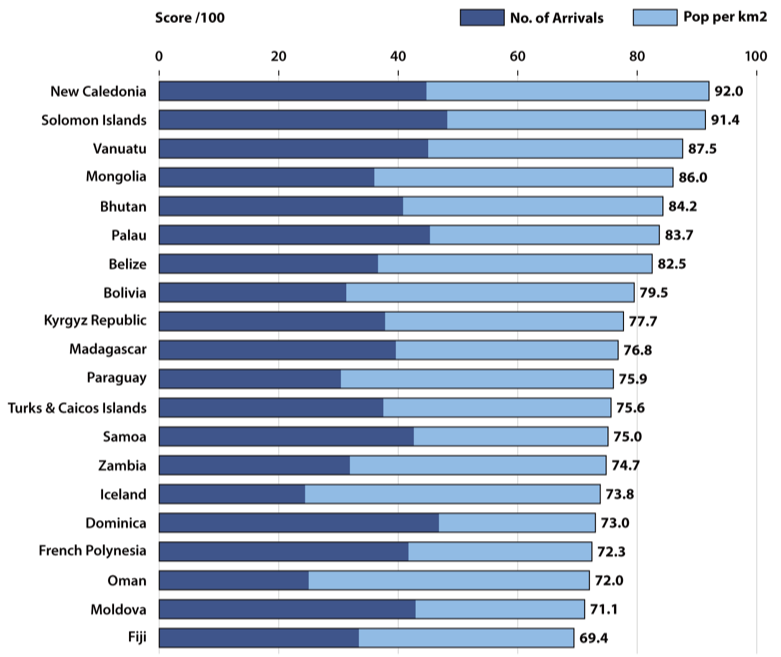