On a recent road trip in Queensland, tourist Hamish Thompson discovered what he thinks should be listed as an important national monument.

“Before COVID restrictions were imposed I did a short road trip around central Queensland,” he said.

He ended up in the town of Banana in Banana Shire.

“I hadn’t done any research prior to my visit. I expected that there would be a civic celebration of the fruit, and I was ready to load the car up with souvenirs.”

But it turns out Banana is named after a 19th century bullock. And, after visiting the shop and restaurant, Thompson realised the town was completely banana-free. Or so he thought.

“I stayed at the excellent Banana Motel and woke in the middle of the night, after a vivid dream about the scene in Indiana Jones and the Last Crusade when the hero climbs a set of stairs in a church in Venice and looks down to see a giant X marking the spot on the floor.

“I got up, opened Google Earth, searched for my location, and there, right in the heart of the town, was a giant traffic island shaped like a banana.”

But what to do? Some would simply post to social media or lock the news away for a cute little Aussie anecdote to tell friends overseas, but not Thompson.

“I wrote to the Mayor to point this out. I completely respect the town’s origin story, but I asked whether the banana-shaped traffic island could be painted road safety yellow as a homage to the fruit.

“I can’t be alone in thinking that a dual homage might be a nice thing to have at the heart of the town, especially if it was visible on Google earth.  I did an aerial sketch to show the Mayor and his team what I had in mind.” 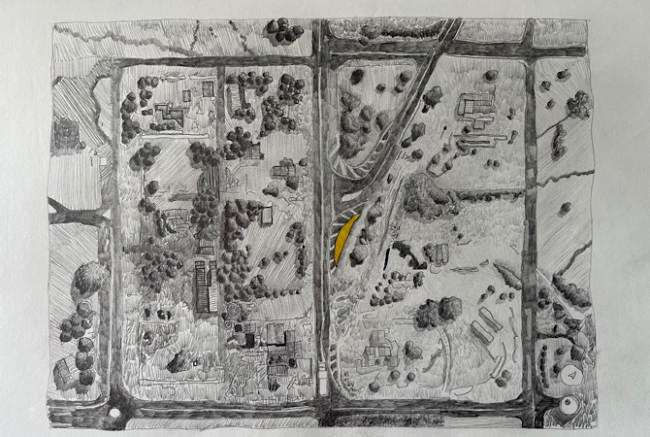 Thompson and the mayor talked and, while supportive of the idea, road safety was foremost in the mayor’s mind, Thompson said. That said, the mayor said he would speak to the relevant traffic team in Queensland central government to see what could be done.

“It’s fortuitous that road safety yellow is a similar shade to a fully ripe fruit, so I’m hopeful,”

“It would help to put the charming town of Banana even more firmly on Queensland’s - and Australia’s - cultural map.

“The country has a great tradition of cultural monoliths - the Big Prawn, the Big Pineapple and the Big Merino, to name three.  Given the town’s name, I think that the giant concrete banana at the heart of the town, directly opposite the statue of the bullock, would be an appealing idea, a great addition to the list of important national monuments, and would probably bring more bunches of tourists to the town.”