Where to go it alone for the first time

In which countries should you go it alone?

Solo travel can be daunting, but it’s also a great way to discover the world. Just think of all the times you’ve bickered with companions over destination choices, directions, hotels and even meals. Now imagine having none of those...

Comparing the costs of accommodation and food, crime statistics and many other ranking factors, UK insurance provider GetGoing has released its first Solo Travellers Manual. Topping the list of most suitable countries for the first-time traveller, was Japan. Given its low level of crime, Japan’s place at the top of the list is also testament to the experiences on offer all over the country, from hot spring bathing to street side dining.

Cuba’s place as the next best nation for new solo travellers is (arguably) as surprising as Japan’s inclusion at the top of the list isn’t.

While the Caribbean country is far from affluent, it offers sights unlike anywhere else in the world - like eclectic architecture and vintage cars that travel alongside idyllic beaches. It’s also considered highly safe, as well as offering dirt cheap drinks.

In third place on the list, New Zealand is also deemed an awesome place to visit for first-time single travellers. As well as boasting spectacular natural landscapes (that are free to see), NZ has the highest Global Peace Ranking on the list.

For new solo travellers getting about on a shoestring, the best countries were found to be Ghana, Indonesia and India.

“Travelling solo is one of life's most inspiring adventures; no matter where you do it or how it has the ability to renew a passion for understanding the world around you and all that is in it,” a GetGoing spokesperson said.

“We recommend you plan in advance as much as possible but also to not be afraid to take calculated risks which is why we have devised the Solo Travellers Manual, to help first-time solo travellers, as well as seasoned travellers, embark on new adventures.”

Have you travelled alone? Where did your first solo trip take place?

Here‘s the full list (all prices are in GBP): 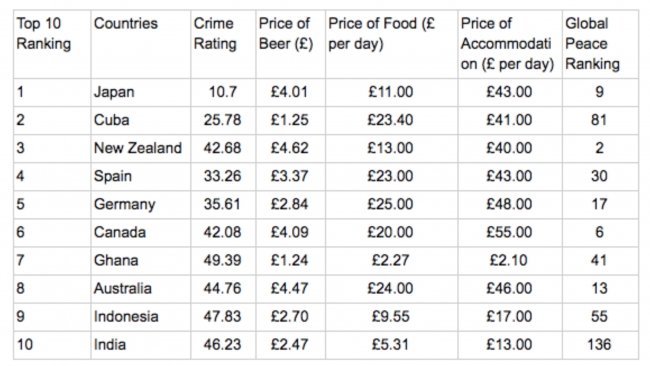