Which states/territories are planning the most holidays?

There’s arguably never been a better, or more important time to travel within Australia. In the wake of devastating bushfires and the absence of our largest tourist source market – China – due to coronavirus, domestic tourism needs us.

But which states and territories within Australia are most heeding the call to plan a local break? 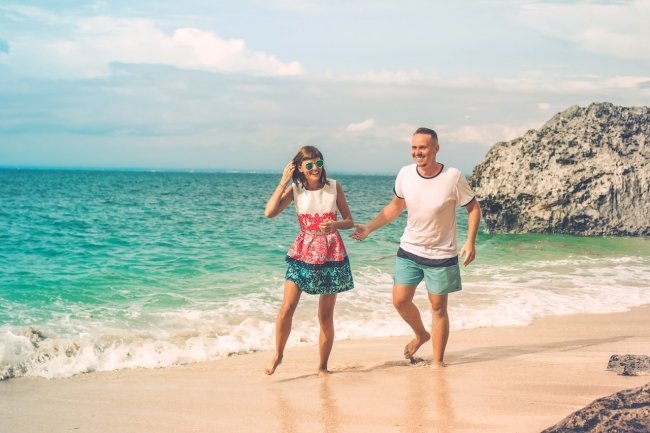 According to the new Holiday Travel Intention Report, the Australian Capital Territory and Victoria are leading the way, with nearly three-quarters (74.4%, 257,000) of ACT residents (aged 14+) planning a vacation in the next twelve months and a similar number (70.7%, 3,869,000) from Victoria doing the same.

Released by market research company Roy Morgan, the report found that domestic holiday intentions had decreased over the past year, presenting “significant challenges” for tourism operators.

“There continues to be a decreasing proportion of Australians intending on taking a holiday in the twelve months ahead – now at 13.7 million (65.8%),” Roy Morgan CEO Michele Levine said.

“This trend has been evident over the last few years and the decline in consumer confidence and the Australian Dollar, and of late, concerns surrounding the coronavirus in China look set to continue exerting downward pressure on holiday intentions.”

“The concerns relating to overseas travel present an opportunity to Australian regions that have been hit by devastating bushfires, severe flooding and even cyclones in recent months.”

In addition to lower rates of intended travel, the report revealed that Australians were also planning shorter holidays.

Overall, more people intend on taking short breaks (1-2 nights) than long getaways (3 or more nights), except in the ACT and WA.

“Another concern for travel and tourism operators is that there has also been a drop in the length of holidays compared to a year ago. The intended length of peoples’ next domestic holiday has declined from 4.02 days to 3.54 days, and from 19.78 days to 19.56 days for peoples’ next overseas holiday,” Ms Levine said.

“The declining holiday length trend is especially evident for long holidays of 3 or more nights. When compared to twelve months ago, the number of days per long domestic trip has dropped from 11.27 days to 10.63 days, and from 21.47 days to 20.49 days for long overseas trips.”

The report drew its findings from the Roy Morgan Single Source survey (Jan-Dec19), which polled over 50,000 Australians in face-to-face interviews. 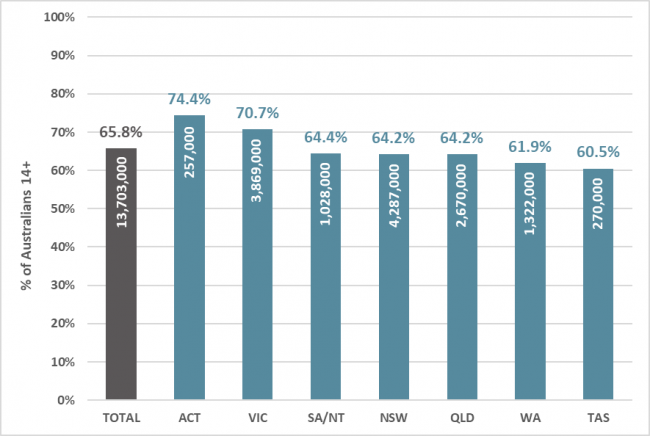 Proportion of Australians intending on taking short and/or long holidays 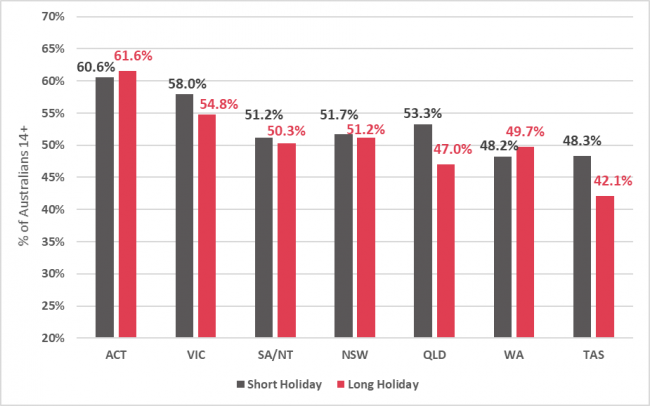