A German lesson in superhero-ism (and a FLIGHT REVIEW)

JENNY ROWLAND was flying from Frankfurt to Singapore when there was an inflight “incident”. Here’s how a fellow passenger saved the day.

“They are Germans,” he said. “They don’t break the rules!”

The tension broke and the plane erupted in laughter.

I’m on a Lufthansa flight LH0778 from Frankfurt to Singapore and there’s been an incident.

The French lady who has managed to bag four seats for her and her child has refused to put on her mask…and seatbelt and has been ordered off the plane by the outraged German captain.

It’s like a car crash. Everyone is staring and straining to hear but can’t understand her very high pitched French accent.

She refuses to move or comply and we’re now one hour past our take off time. In the end a very charming and good looking (it has to be said!) bilingual German passenger manages to negotiate with her and she finally agrees to belt and mask up. His comment about Germans not breaking rules is priceless. However It’s still touch and go as the captain and crew are reluctant to have her on board. Aforementioned charming German manages to successfully persuade the captain to proceed with the flight much to all the passengers relief.

The rest of the flight, I am happy to report, goes very smoothly.

The crew handled the incident very professionally (with the help of the handsome gentleman). They kept us all informed as to what was occurring and were ultra calm and friendly. The flight is fairly full but interestingly when we were at the gate they announced you could “buy a row of four seats” in economy for 290 euro. I’ve never heard of this before and think it’s a great idea. Double interestingly the French mum hadn’t bought a row but still managed to snag one.

The entertainment is about a 6 out of 10 with some new movies (I recommend Blackbird - Susan Sarandon and Kate Winslet both brilliant) and a few good TV shows. I’ve been spoilt with Singapore Airlines massive selection and wider screens. 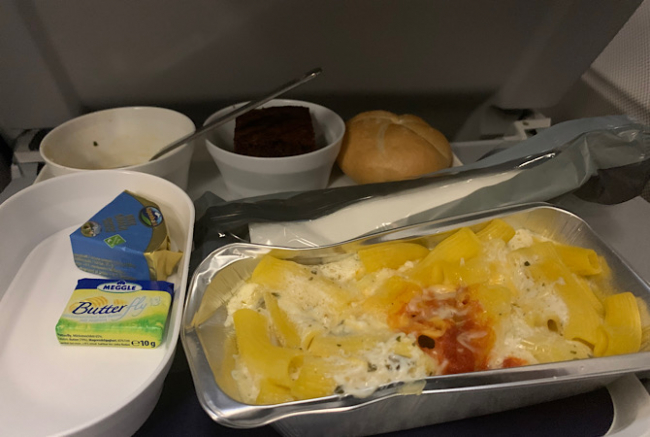 The food is also pretty good. No choice is offered but the Mac and cheese and chocolate brownie is quite delicious. The breakfast sandwich is also very tasty.

I forgot my toothpaste and the attendant gave me a free business class vanity pack which was greatly appreciated.

We made up some time on the flight and landed incident free only half an hour late. I think the French lady made a speedy exit!