ASK THE PILOT: How long does it take to learn to fly a new plane?

airBaltic chief pilot Captain Gerhard Ramcke has been flying the A220s since they came on the market. But how long did it take him to learn to fly the new craft? 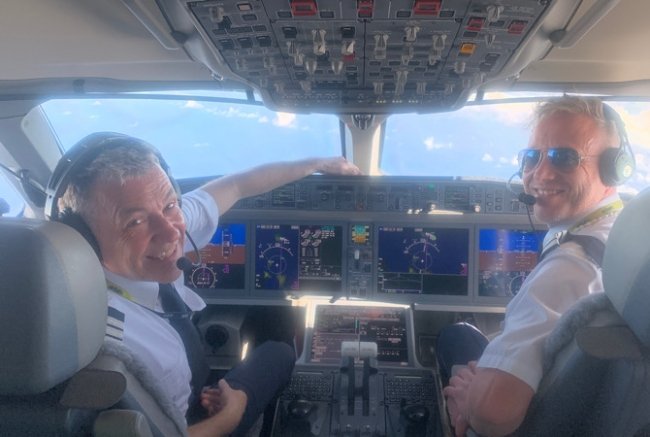 Onboard a demonstration flight of the A220-300, Traveltalk asks airBaltic chief pilot Captain Gerhard Ramcke, who has been flying the A220s since they came on the market, just what was involved in the training to learn to fly the new craft and how long the process takes.

“A pilot typically trains about a month to fly a different aircraft,” Ramcke told Traveltalk.

“Initially you start with theoretical training which you do via CBT and books (probably via a tablet rather than a physical book).”

This theoretical knowledge is generally about the aircraft’s systems, its aerodynamic features, the dimensions of the aircraft and its limitations, he said. “All the standard stuff.”

How to buy a plane: shopping for aircraft with Air Vanuatu

Once they’ve got that down, pilots then go into the simulator.

“The simulator consists of a so-called fix-based simulator which is a couple of sessions without any movement, any motion and then there are simulator sessions with full motion which should simulate the behavior of a real aircraft so that every movement that you get in there should basically be identical to what you find in the real aircraft.”

Pilots then put in a bit of practice and get their licenses.

And thanks to its new A220s, Air Vanuatu expects to not only increase the number of flights in its existing Aussie markets, but also start services in new ones.

Interestingly, Air Vanuatu’s A220 will feature a loo with a view, with a window places in one of the two rear lavatories on each aircraft.