A couple in the US received a baby shower of a completely different kind whilst flying home with their newly adopted daughter.

“W/ clearance to return home to California, my wife carried our precious bundle, while I offered numerous apologies to passengers while maneuvering the aisle with 4 bags,” Dustin wrote in one of many tweets following the flight. 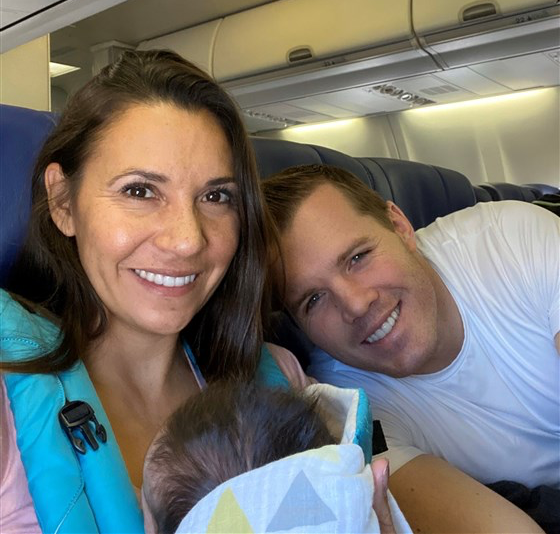 Things got a little more difficult when their daughter “awoke and politely informed us she wanted a new diaper” during the flight.

As he returned to his seat after changing the nappy in a space cleared by a flight attendant, Mr Moore was asked by another cabin crewmember about their daughter.

Shortly after this, the flight attendant, called Bobby, made an announcement welcoming the special guest on board.

Following some loud cheers, Bobby passed around napkins and pens for passengers to write any well wishes (and advice) for the couple.

Some of the messages included:

- "Enjoy every minute. It goes by sooo very fast."

- "She will have you wrapped around her finger."

“On one of the last ones, a person had written down they were adopted 64 years ago and 'Us adopted kids need extra love,'" Moore told Today.com.

The Moores ended up with around 60 napkins and a set of pilot wings, which they added to a scrapbook of their flight.

"The outpouring of love from that flight, brought on by the actions of two thoughtfully observant flight attendants… it exceeds my ability to describe what it meant to us,” said Dustin.

“How much those wings and written notes uplifted two new parents determined to love their new daughter."