No one injured in incident

A gear failure forced a Myanmar National Airlines plane to make an emergency landing at Mandalay International Airport without its front wheels. 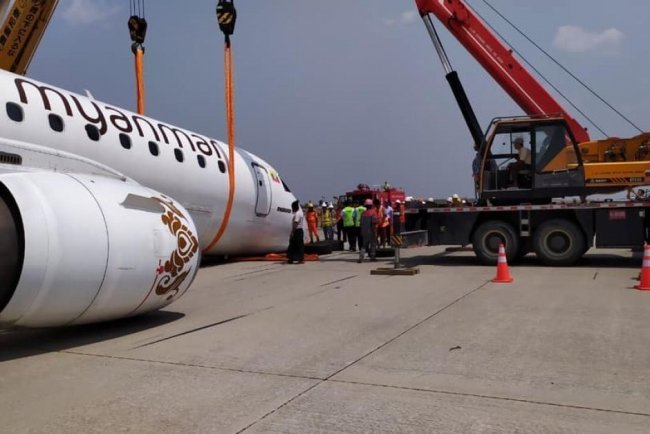 None of the 82 passengers and seven crew aboard flight UB103, which had travelled from capital Yangon were injured in the incident.

According to the carrier’s Facebook page, the pilot then unsuccessfully tried a back-up procedure to pull down the wheels.

After performing two fly-bys past the tower to confirm the situation, the captain dumped fuel, and proceeded to land.

During the landing, the nose tilted down and scraped the runway, causing a dramatic shower of sparks.

In a video of the incident shot by a flyer, an urgent but orderly evacuation takes place, after which time passengers can be seen walking away from the plane, many smiling.

The incident caused the airport to close temporarily, with smaller aircraft able to operate again within three hours.

Last week, a Biman Bangladesh Airlines plane ran off the airstrip at Yangon airport after landing in bad weather.

At least 15 passengers and crew were injured in the incident, while the Bombardier Dash 8 aircraft was torn into several pieces.