Tales of poo and barking: working from home tips

This morning one of my colleagues walked into my office wearing gumboots and a ball gown while another committed an act that can only be described as sexual assault against her. Meanwhile the other two (I think they’re from HR) chased each other around the office attempting to bite each other’s ears.

This is just a typical day in the office which, for the last seven or so years has been run out of home. I share my ‘office’ with my partner who also works from home, three dogs, a four year old, and a 74 year old. It gets noisy. 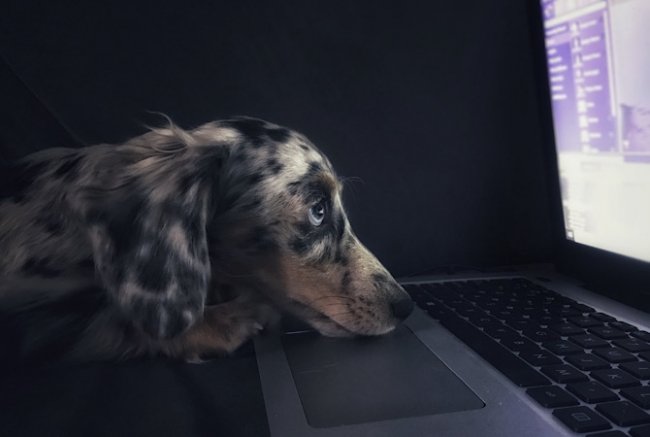 Someone once wrote that the secret to successfully working from home involves getting dressed up. Bah humbug, I say. Maybe at first you’ll pop on a casual Friday ensemble but soon you’ll be in trackies and uggs and the world will be a better place for it. That said, invest in a fabulous long coat or cardigan that can be thrown over the rattiest of pyjamas and you’ll be ready for the odd urgent video chat and an unforeseen trip to the shops. Choose clothes that are suitable for both bedtime and FaceTime.

HIT MUTE WHEN IT’S NOT YOUR TURN TO SPEAK

You cannot control if your dogs start a choral group or if, as happened yesterday, your kid shouts that she’s done a poo and there’s no toilet paper. You can however control who has to hear it. If you’re not speaking hit MUTE. Just make sure you unmute yourself every now and then so you can make the odd non-committal grunt.

If you don’t have as many people to talk to during the day as I do, adopt a dog for your sanity. Talking in a high pitched baby voice to a kelpie-wannabe jack russell is less odd than asking yourself if you’re ready for lunch.

EXERCISE WHEN YOU WOULD HAVE COMMUTED

If your old commute was half an hour, take your dog for a walk for the same amount of time. It will likely be the only time you’re not looking at a screen.

People often think working from home is cruisey. The reality is that you often don’t stop. Take your chargers out of your bedroom and charge your devices overnight so you’re not tempted to check your emails last thing at night and first thing in the morning.

With everyone at home now be ready and willing to bribe your kids with whatever keeps them quiet if you need to make a phone or video call.

ORGANISE YOUR MEALS AS YOU NORMALLY WOULD

You don’t have to prepare all your meals at the beginning of the day, but it’s a good idea to know what you’re going to do for lunch so that you’re not spending hours in front of the fridge wondering what to eat. And if it helps, write DO NOT TOUCH on a tub of yoghurt and eat it illicitly.